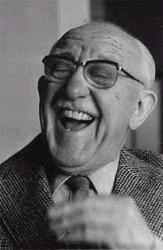 Real Name:
Halldór Guðjónsson
Profile:
Icelandic novelist and author, born 23 April 1902 in Reykjavík, Iceland and died 8 February 1998 in Gljúfrasteinn near Mosfellsbær, Iceland.
He was awarded with the Nobel Prize in Literature in 1955.
The Nobel Prize in Literature 1955 was awarded to Halldór Laxness “for his vivid epic power which has renewed the great narrative art of Iceland”. That’s a lot to live up to but Halldór Laxness‘s mark on the literary history of Iceland is hard to underestimate. The only Nobel laureate Iceland has ever produced, Halldór’s books present a nuanced portrait of the Icelandic society during an age of great social changes.
Sites:
Wikipedia, whatson.is, glatkistan.com
Variations:
Viewing All | Halldór Kiljan Laxness
H. K. Laxness, Halldor Laxness, Halldór Laxness