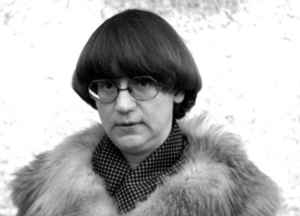 Profile:
(1946 - 1994) German pharmacist, artist and musician, she attended courses with Herbert Eimert, founder of the Studio für elektronische Musik in Köln at the WDR, became interested in these new sounds and recorded synthesizer musics privately for many years. Long after, Jan Jelinek met her son by chance and learned about his mother's hobby, finally publishing a compilation of music from the scarcely marked reel-to-reel tapes and HiFi-cassettes.
Sites:
Facebook
Variations:
Viewing All | Ursula Bogner
Roach Ursula Bogner

May 9, 2022
the secret was protected throughout the promotion of the first album, to the point of organizing an exhibition around Ursula Bogner without anything leaking. Nice tribute to the pioneers of electronic music. The artistic deception can be disturbing, Romain Gary/Ajar has suffered the consequences. But it is also an old stylistic device: Duchamp/Rrose Celavy, Madlib/Quasimoto, Deux Filles...

November 26, 2021
Why invent fake believe avatars like Ursula Bogner when there's a world full of visionary female electronic artists like Delia Derbyshire, Janet Beat, Daphne Oram, Suzanne Ciani and Lena Platonos to name out there just waiting to be enjoyed?
Like the fake Kosmischer Läufer 'The Secret Cosmic Music Of The East German Olympic Program' series of albums allegedly from the 1970s, it is one of those ideas that sounds good in theory but in practice it's very sophomoric.

June 3, 2021
Ursula is an unnecessary marketing strategy from Jan Jelinek pretending to be and old woman. Productions with ideas way ahead of its -pretended- time. It's a pity, I really enjoy the lps, I don't need all this pseudo artistic paraphernalia.

January 27, 2019
Is she real or not? Some say this is actually Jelinek pretending to be an old woman.
See 2 replies