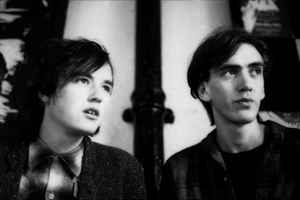 Profile:
English indie pop band from Water Orton, Warwickshire. Formed by Lawrence who recorded the first single 'Index' on his own label in 1979. The first string of releases through Cherry Red Records featured the playing of classically trained guitarist Maurice Deebank. For some reason despite critical acclaim and a #1 indie single ('Primitive Painters') they never made it big, but have remained a cult band ever since. After Deebank left in 1986 they signed to Creation Records and released Forever Breathes The Lonely Word, arguably one of their highlights and still lauded as one of the decade's best pop albums. They went on to release ten albums in ten years, fulfilling Lawrence's 1980 prophecy.
Sites:
thefeltdecade.com, Facebook, Wikipedia
Members:
Gary Ainge, John Mohan, Lawrence Hayward, Marco Thomas, Martin Duffy, Maurice Deebank, Mick Bund, Mick Lloyd, Mick Travis, Nick Gilbert, Philip King, Richard Left, Tony Willé
Variations:
Viewing All | Felt
フェルト

April 28, 2022
If anybody has the Felt photograph book (published by First Third Books) and is willing to sell I'd be willing to purchase it. Also interested in the Foxtrot Echo Lima Tango fanzine book if anyone has that. Just message me or reply to me on here and I'll get back to you, thanks!

December 3, 2019
Has anybody noticed some of the 2018 vinyl reissues have a small letter (e.g. "F") in a red box printed on the spine? When lined up the first 4 albums spelled out "FELT". Guessing the last 6 spelled out "DECADE"? Anybody got any info on this variant
See 1 reply

March 15, 2019
Although a big fan of their music since 1986 and lucky enough to own all their albums, I just can't help getting annoyed more and more by the fact that they (apparently Lawrence) keeps messing with the re-releases of the albums (editing tracks as Crucifix in Heaven, changing the original artwork (Let the Snakes and recently also The Strange Idols Pattern). Instead of making their albums widely available, it seems almost on purpose that their albums are so hard to get. The new re-releases with all the extra's, dissapoint me again: it seems the strange format (CD with 7") is meant more as a collector's item than to allow people to actually purchase their music. So, let us have the abums rereleased with the original artwork, all tracks and okay, make Ignite The Seven Cannons a double-album with the old mix and the new mix for us to hear!

November 20, 2015
Now the time has arrived for Re-Issues in vinyl. If not now, when?
Now that vinyls is trendy, RSD etc . Now, that most of all originals reach 50 euros on discogs
See 2 replies

April 2, 2014
I discovered this band late - but have made up for it by listening to them endlessly over the past few years. To my ears, the music is so blissful that I never care which song is playing - I'm too wrapped up in the glorious sound which Felt created. Yet another group that never got the credit they deserved so I hope that the satisfaction of creating such staggeringly rich music was reward enough for them.