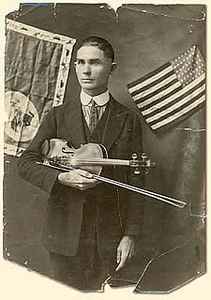 His family moved to Hamlin, in the Texas Panhandle, in 1890, when he was only 3.
His first instrument, at age 5, was made from a long-necked gourd and a tanned cat hide.

By the end of WWI, Eck had become a well-known area fiddler, and a fixture at the many fiddling contests held in the state. By now he was living at Vernon, often performing with two senior musicians (Lewis Franklin and A.P. Howard).

The standard story has always been that Eck and Gilliland, dressed in Confederate uniforms, appeared at the door to Victor begging for a try-out, and that the Victor officials finally cut a couple of tunes to placate them, grudgingly releasing them April 1923.
In fact, Robertson was wearing what one witness called "the garb of a western plainsman," and the Victor A & R men were quite impressed: so much so that they actually recorded 12 sides [or 8?] over the two-day span of 30 June and 1 July 1922.

All but four sides were issued, and stayed in print for a number of years.

_ 30 June 1922 Eck and Gilliland recorded 4 unaccompanied fiddle duets:
"Arkansas Traveler"and "Turkey in the Straw'' with Gilliland playing the melody and Eck a high harmony.
[Apple Blossom and Forked Deer were not released]

Two tunes from these sessions, "Sallie Gooden" and "Arkansas Traveler," were released in April 1923, thus becoming the first commercial record ever released by a country musician.

When Mike Seeger, John Cohen and Tracy Schwarz visited Eck in 1963, he was seventy-six years old.
The next year he performed at the UCLA Folk Festival, and in 1965 he appeared at the Newport Folk Festival. Even then he was still plenty able to charm an audience with his music and talk.

_ the first one, I found a semi-current mention of it on an Old-Time music forum:

" I seem to remember seeing an article in the last couple of years (I can't remember what magazine) written by John Fahey, who came across Robertson more or less accidentally (late 50's? early 60's?). "

What I remember is John Fahey, believing that Eck Robertson was dead, went to Texas looking for stories about him.
He stopped, I think, in Amarillo and asked people in the street if they ever heard of "Eck Robertson" , and he learned : " Sure, he is at the barbershop right now"
[must have been early 1960's as The New Lost City Ramblers visited him in 1963]

_ story #2:
I may have read that in 1978, in the book "Beginning Old-time Fiddle by Alan Kaufman" [1977].
Eck Robertson is on the cover.
I read [there ?] that people thought he was left-handed because of an error on a recording where the image was reversed.