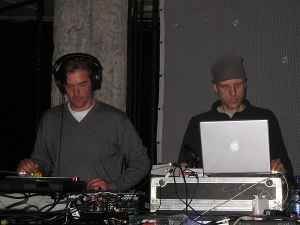 Profile:
Basic Channel is a German techno production duo and record label, composed of Moritz von Oswald and Mark Ernestus, that originated in Berlin in 1993.
The duo became known in the mid-1990s for a series of vinyl-only releases under various aliases marked by minimalism in both production techniques and graphic esthetics. Basic Channel is widely regarded as a pioneering force of minimal and dub techno.
The minimalist esthetics of the 12"s released by the duo / label can lead to ambiguities as to whether the names listed on releases are aliases / project names or just track / release titles, meaning that appearances of those tracks on compilations or DJ mixes were often inconsistently credited.
Sites:
basicchannel.com, Facebook, Wikipedia
Aliases:
Cyrus, Maurizio, Quadrant, Rhythm & Sound, Round Five, Round Four, Round One, Round Three, Round Two
Members:
Mark Ernestus, Moritz von Oswald
Variations:
Viewing All | Basic Channel
Basic

January 3, 2009
In late 1993, mysterious records of mind bending repetitive and body bashing beauty and length when played with the proper amount of sound to push them. Plain sleeved records with mysterious graphics pressed in Detroit, but made in Germany by two guys from Berlin who liked faceless techno bollocks and took it to the nth degree in a variety of shapes all aimed towards face eating repetition and stretching the groove into a place that opened a rich and vast new territory in music for the dance floor and sound equally German as at was Midwestern with its fondness for large walls of sound and dancing in dark and dirty disused warehouses until the sun came up.
These records found a perfect home in midwestern rave culture. These records also gave birth to minimal. While Dan Bell was reducing sound to the basic blocks. Basic Channel presented a music that was all there and the music at first did not change and one part of the record more or less was like the other. The parts modulate and shift into a different shape. It was a holographic techno. A study to reach its most beautiful in branches like Quadrant and radiant and most eat your brain in Cyrus.
The love for dirty sand in the mixing board dub inevitably begin tearing the density apart and as a result. Basic Channel as a label closed, but not before laying the foundation for dub techno and a more holographic, more functional techno, exploring M and Main Street and laying the foundation for Chain Reaction.
These records are holy grail and the blueprint for a new form of techno made for the dj and for large amounts of sound to shake every part of the body with.
See 2 replies

Authors of the most genuine electronic sound.
As an older listener, I was in position to watch how electronic music scene grows and develops itself into several distinguished styles, all coming up from the same root - and that particular root was Basic Channel. Everything is here: ambient, dub, minimal, house, techno, heavy experimentation... These people are condemned to be untouchable and unrepeatable.
Listen to what you want, learn what you can - Basic Channel is the beginning of contemporary music.

Haven’t you ask yourselves like never a simple drummer of a complex from the name "Palais Schaumburg" can create a musical kind, from which all drift and which all part?
Sure it is that in this evolutionistic process, Moritz Von Oswald has not been found alone, but he has been taken advantage of the collaboration of an other myth-genius like Mark Ernestus.
From the series, "God makes them and then it couples them".
Therefore, analyzing the case, we find ourselves in the presence of two geniuses, in the presence of the historical sonorous sources.
The sound leaves from they 'couse they created the sound.
They have created the Dub.
They have created the Minimal.
They have created the Dubby, techno or house that it is.
And like if it were not enough, they are also tries in a plan that it sees to fill up the Reggae of a new style, that one they for the note.
Many people could reproach to me the rehearse, the monotony of their musical productions.
Nothing more mistaken.
To these persons I would answer saying if in the course of the time the artists can change tastes altering their kind or if not modify it based on their experiences of life, this pair is therefore remained faithful to theirs begins them plan that therefore high fidelity could be transform in a religious faith.
Sure it is that dedicating itself to the reggae they are not moves from the dubby, but they are enters in a more spiritual context more mystic, because we must say it, the reggae is that.
Sung from fierce people who have one therefore high tradition and inner force...
But I don’t want to dwell on this kind, I’m not the more suitable subject in order to make it.
I want instead continue to speak about the Basic Channel.
Of the experimenters.
Of the inventors.
Of the creators.
But do you become account in that kingdom/dimension they drags you with their music?
Do you know the effects of such sounds?
Naturally all benefits for our spirit.
Gentlemen, I cannot be technical speaking about this pair, I cannot compare them to nobody.
How is possible to compare a painter like Picasso to a Van Gogh?
One watches them and enough, one admires them and enough, one contemplates them and enough.
Here, you must limited to listen all their pieces and prayed so that their productions cannot be never get exhausted.
Because if exists a more terrible punishment than indifference, this is the oblivion.
The absolute forgetfulness.
But they will not never come forget even if tomorrow they had to be tired and never more to produce.
Could you forget a God?
Creators of music.