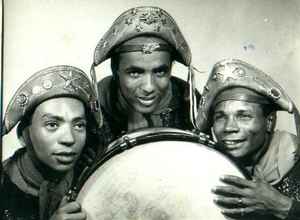 Trio Nordestino was one of the most prolific, successful and influential Brazilian groups within the Forró style. The trio started its activities in 1958, releasing their first LP in 1963 (Trio Nordestino). Its most well known formation was composed of Cobrinha (José Pedro Cerqueira, triangle and backing vocals), Coroné (Evaldo dos Santos Lima, zabumba and backing vocals) and Lindú (Lindolfo Barbosa, accordion and vocals). After Lindú passed away in 1982, Genário (who at the time had an established solo carreer and was touring with Luiz Gonzaga) took his place as accordionist and lead vocals, and stayed until 1992, when he left again for his solo career. Cobrinha and Coroné passed away in 1994 and 2005, respectively. The trio then went through other formations and is still in activity as of 2020.

November 22, 2019
There are two separate Trio Nordestinos. This discography mashes them together, rather confusingly.