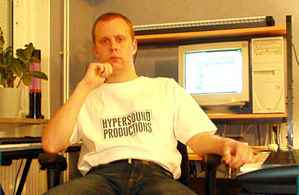 Profile:
Born in february 1973, Anders grew up with his parents and younger sister in the small coastal town of Härnösand, Sweden. His interest for music became apparent around the age of eight, when he started singing in a boys choir as well as playing the recorder (flute). He later dropped the recorder in favour of the piano, but after a few years he was tired of taking lessons and playing music made by others - he wanted to make his own instead.

In his early teens, Anders started experimenting with music together with his friends that had access to eletronic instruments such as keyboards and synthesizers. None of these musical experiments resulted in any serious productions, but the experience was worthwhile nonetheless. In 1988 when Anders came across the first album by Laserdance, "Future Generation", he was totally hooked and knew that he wanted to try to make this type of music himself. Soon the Amiga 500, with its (for the time) excellent 8 bit/4 channel music chip became the platform for his musical endeavours.

Over the next nine years (1989 - 1998) Anders produced a number of songs using computers (after the Amiga came the PC). At this time he had already started building a small home-studio with synthesizers (mainly thanks to his understanding parents!), but he used these instruments as a basis for sampling sounds for the computer rather than using the synthesizers themselves in music productions.

After a few years of low activity in the mid 90's Anders decided to take a more serious approach to music to see where it could take him. In 1998 he bought some more equipment for his studio and started producing several songs in different styles, this time entirely based on his synthesizers. Some recognition came with the launch of his own webpage at mp3.com in 1999, where he could reach a big audience and get some attention for his work.

Without a doubt mp3.com along with featured music at the new website laserdance.de played an important part in the development to follow. In late 1999 Anders was contacted by producer Humphrey Robertson of Hypersound Productions, who was about to start working on a project to release music with new artists in the synthesizer dance genre. Submitting two tracks for "Synthesizer Dance Vol.1", Anders got a boost of inspiration and continued to produce music for "Synthesizer Dance Vol.2 and 3".

At the same time He kept himself busy with composing music far from the spacy sounds of synthesizer dance: new age, ambient and orchestral type songs. Even though this has not resulted in any record deals or similar, Anders is currently represented by Industrial Soundworks, a company specializing in licensing music for film and multimedia applications.

After the releases of the Synthesizer dance cd's, Anders wanted to realize his dream since many years: to make his own cd. After many months of hard work (constantly interrupted), over a period spanning almost two years, the cd was finally finished. Besides his solo career, Anders is a co-member (with Marco Rochowski) of synthdance project Macrocosm.
Sites:
Facebook
In Groups:
Macrocosm
Variations:
Viewing All | Anders Lundqvist
A. Lundqvist, Lundqvist