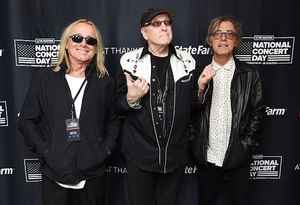 They became a success with their self-titled debut, in which they started off their defining sound; the catchiness of The Beatles with the speed and energy of Punk rock. The Los Angeles Times proclaimed: "Cheap Trick gained fame by twisting the Beatlesque into something shinier, harder, more American."
They have often been referred to in the Japanese press as the "American Beatles."

The band is most known for their tracks "Surrender," "I Want You To Want Me," "Dream Police" and "The Flame," - and did a cover of Big Star's "In The Street," for American sitcom "That 70's Show," (season 2 onwards), and also the theme tune to the American satirical late night television program "The Colbert Report."

Surprisingly, for the age of the band, the line-up hasn't changed a great deal. Also, the Illinois State Senate has declared April 1st to be "Cheap Trick Day." They also took the 25th spot in "VH1's 100 Greatest Artists of Hard Rock."

Nice that Illinois has recognized Cheap Trick. Now they just have to give Styx and REO Speedwagon their days. I love all three bands and fans in Illinois were spoiled having all three at the same time. Between the three, they have sold over 110 million albums... AMAZING!

August 18, 2020
I've seen Cheap Trick no less than 13x over the years and they have NEVER disappointed!! One of the best bands that's still going after all these years. Love all their music from the very first album to the most current!! I'm always looking forward to new releases by them!
Reply Notify me 3 Helpful

July 15, 2018
One of the best groups I have seen from the states. Very entertaining and WELL worth the admission price, you will not be dissapointed.
Reply Notify me 3 Helpful

Merzdős number by lehapanin666
Seen Live by BRAINBUSTAAAHHH
Artists I've seen in concert by Chawk720
(THE HARD & HEAVY MUSIC HALL OF FAME) by crimsonmetal74
Favorite Artists by innoste
Concerts, I've Seen by ILoveRockAndRoll
Some Of My Favourites by piharrod
Seen Live... by ykr_discs
Favorite Artists by 11able
Live Concerts by postpunkmonk
Artists I've Seen " Live In Concert"... by Klaus_L
Lista de mis recitales by ramalic
Watchlist by rockandroel
Seen 'em live! by markm65
Favorite artists by patlebouc
“The Encyclopedia Of Heavy Metal” by crimsonmetal74
Bands / Artists I've Seen Live by sirx1970
Decent size collection with a wide variety of music vinyls by FERNDIZZLE
基本リスト用のアーティスト一覧 by 3313project
基本リスト用のアーティスト一覧 by arapstock
Favorite Classic Hard Rock by DeOlJuanTwo
Favorite Artists by best-tunes
Concerts I've Seen by golfingbobt
Gigs I went to. Live in Godzone by slimkram
Artists for the Future by Milesbeet-hoven1
Seen Live..... by MO-Music13
“VH1’s Top 100 Hard Rock Artists” by crimsonmetal74
All time favorite artists by tolivercrash
I've seen them live, a very short list by tolivercrash
LP Inspiration by Brogaard
Bands I Have Seen by harkusinatra
Phantoms - Moments of Music by oceanographer
The Rock'N'Roll Hall Of Fame by stassen
My Music by crazybuyer88
Artists in My LP Collection by sillypenta
Classic Rock Megalist by eeeben
80's Mega Collection by eeeben
power pop by bri.k.sal
VH1 Greatest Artists Of All Time (2010) by wbwolf
Bands by UmJammerGabby
View More Lists →