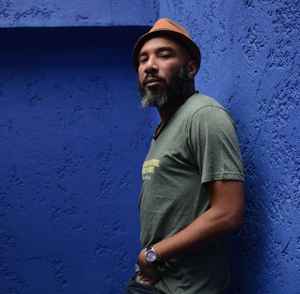 Real Name:
Anthony Derek Joseph
Profile:
One of the UK's most exciting and innovative voices, poet, novelist, musician and lecturer Anthony Joseph was born in Trinidad and has lived in the UK since 1989. Described as ‘the leader of the black avant-garde in Britain’, his written work and performance occupies a space between surrealism, Jazz and the rhythms of Caribbean speech and music. He is the author of four poetry collections and a novel The African Origins of UFOs. In 2005 he was selected by the Arts Council of England and Renaissance One as one of 50 Black and Asian writers who have made major contributions to contemporary British literature. He has received an Arts Council of England touring award, and an AHRC postgraduate scholarship to complete his doctoral thesis; a ‘fictional biography’ of the legendary Trinidadian calypsonian Lord Kitchener. As a musician he has released several critically acclaimed albums, 4 of which by Anthony Joseph & The Spasm Band. His debut album Leggo De Lion (Kindred Spirits, 2007) featured lyrics taken from The African Origins of UFOs. 2nd album Bird Head Son (Heavenly Sweetness) followed in 2009, coinciding with the publication of his 3rd poetry collection. Rubber Orchestras (Heavenly Sweetness), produced by Malcolm Catto (Heliocentrics) and Jerry Dammers (Specials) was released in 2011, alongside a new collection of poems of the same title. A live album recorded in Bremen appeared in 2013, and Time (Heavenly Sweetness, 2014), produced by Meshell Ndegeocello. He has collaborated with numerous artists, including Archie Shepp, Keziah Jones, Joseph Bowie, Laurent Garnier, Mop Mop, Brzzvll and Osunlade.
Sites:
anthonyjoseph.co.uk, Bandcamp, Facebook, instagram.com, SoundCloud, Twitter, Wikipedia, YouTube
In Groups:
Anthony Joseph & The Spasm Band
Variations:
Viewing All | Anthony Joseph (2)
A. Joseph, A.Joseph, Antony Joseph, Joseph