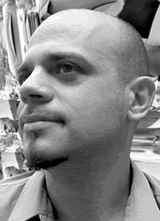 Real Name:
Ned Bouhalassa
Profile:
Ned Bouhalassa (Le Mans, France, 1962) is a studio composer specializing in acousmatic works, based in Montréal. His teachers included Kevin Austin and Francis Dhomont. Attracted by cinema, contemporary visual art and science fiction, he tries in his work to balance form and content, while leaving room for emotion and poetry. Presented in concert and on radio in many countries, his works have won him several national and international prizes (1990, ’93, ’95). Active in the promotion of electroacoustic music in Montréal since 1987, he participates in concerts as a composer and host (ÉuCuE, ACREQ), on radio as host and performer (CKUT-FM, Radio-Canada), in community work (president and editor for the CEC), and in academic duties (teacher at Concordia University, 1991-96). Recently, he has composed music for a variety of media (cinema, television, Internet), and in a variety of techno-derived styles.
Sites:
nedfx.com
Variations:
Viewing All | Ned Bouhalassa
Bouhalassa