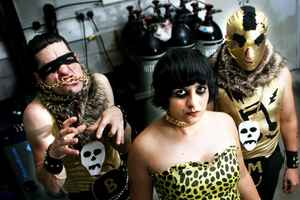 Profile:
Les Georges Leningrad were a Montreal, Canada based rock band, which originally had four members (two couples) until the departure of bassist Toundra LaLouve; and so with the release of their sophomore album, has three, being Poney P (vocals), Mingo (keyboards and guitar) and Bobo Boutin (drums).
The band have maintained that for the next album there will be only two members appearing, and then for the album after that only one, and then none. Then there will be another with all four in a different format and it will start over.
During interviews the band has stated that they are inspired by the ghost of Leningrad.
The band formed in November 2000, and split up in March 2007.
Sites:
web.archive.org, MySpace, Wikipedia, Bandcamp, genius.com, setlist.fm
Members:
Bobo Boutin, Ellemetue, Mingo L'Indien, Poney P.