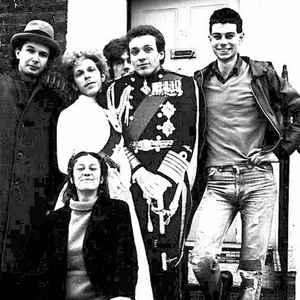 Their music is fun feeded, at time intimate, crossover of acoustic and soft rock elements blending it all in mellow punk, illbient kind of new-wave with reggae style dubs of classical music with 'out there' french beat chants or etrange english chansons. Aside of most of original compositions, they also turned Erik Satie or even Franz Schubert in dub, paid tribute for Debbie Harry in a song as well as made a cover (with a dub version) of Blondie's title 'Sunday Girl'. They also did a nice version of Syd Barrett's title 'No man's land'.
They also released one record bearing 'Frank Sumatra' as name.
Lynn Alice later took the place as lead singer of Dominique Levillain who went into teaching her own creative technique known as Prymary Rhythms (Ryhtmes Premiers).
Aside of this change in members, all above listed are part of the formation but Rick Wilson and Mick Hobbs (The Work), Charles Bullen, Charles Hayward (This Heat) and David Cunningham or Judy Carter have, at times, taken part in the making of some pieces.