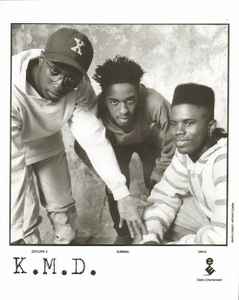 Profile:
KMD, an acronym first for Kausin' Much Damage and then Kause in a Much Damaged Society, was a hip hop group formed in the late 1980's by brothers Zev Love X (Daniel Dumile Thompson) and Subroc (Dingilizwe Dumile), and Alonzo Hodge, aka Onyx The Birthstone Kid. Immediately following the death of Subroc in 1994, when KMD was in the middle of producing its second album, Bl_ck-B_st_rds, Elektra dropped the group from its roster. The death of his brother and being cut by Elektra led Zev Love X to retreat from the industry and ultimately resurface as MF Doom.
Sites:
Wikipedia, medium.com
Members:
Alonzo Hodge, Daniel Thompson (4), Dingilizwe Dumile, Rodan
Variations:
Viewing All | KMD
K.M.D, K.M.D., KMD (2005 AD)

Not sure why Alonzo Hodge is crossed out, while (with great respect) the late Dingilizwe Dumile remains assigned; neither artist should be removed. If going by current status, the group dismembered in the mid 1990's & all artists would be crossed out. If I remember correctly, Hodge was not involved in 'Bl_ck B_st_rds', but still, seems disrespectful to have a line through your name after being present for a cornerstone LP like 'Mr. Hood', not to mention 'Bl_ck B_st_rds' being shelved by Electra & remaining (to it's favour) a 'ghost' LP if you will. If the group were still live, than this might make sense, as it is, all should be fully credited.