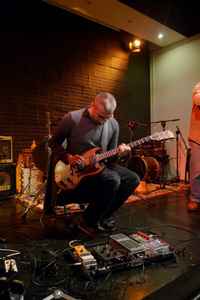 Profile:
Musician, composer and experimenter, Fabio Cerina born in Sardinia in 1973. At 14 he starts to play guitar.
In 1996, he is a founding member of Bron-y-aur, an avant-rock band with hard-psych, kraut and free-jazz influences. With the quartet he records and issues 5 albums (many of them with Wallace Records) until 2007 when the band broke up for logistic reasons. During the experience with this band he develops the experimental and improvising approach which keep being essential ingredients of his style as a guitarist and composer.
In 2005 he founded Plasma Expander in Cagliari. With the trio he plays an instrumental rock which balances structure and improvisation, noise and groove. With the band he records and issues 5 albums with several italian independent labels and with Wallace Records always present. He also plays hundreds of concerts in Italy, Europe (Spain, Portugal, France, Switzerland) and recently in the US. Plasma Expander are about to record the material for their 6th album with Simon Balestrazzi.
He recently also founded a duo project STUN, together with the percussionist Alessandro Cau. Stun music is a step ahead of Plasma Expander, with a more experimental approach, touching the most extreme territories of improvisation joint with geometric, repetitive, noise and psychedelic moments.
He is actually involved in two project.
The trio Uncle Faust (with Raffaele Pilia and Antonio Pinna). The Uncle Faust concept was born in 2008 when Fabio Cerina recorded some solo instantaneous compositions in his tiny room and then recently became a trio. Psichedelia, weird-folk, blues, mantra, groove, repetition, dronescapes. These are some of the keywords.
where he is developing and more introspective, relaxed and soft approach to psychedelic music.
The quartet Dandaure (with Fabrizio "Bozzi" Fenu, Krim Bouslama, Billy Guidoni). Dandaure is an organic creature formed by 4 musicians with very different backgrounds, heading from France and Italy. Dandaure plays on-the-spot compositions, music ranging from noise rock to abstract blues to no-wave to psychedelic free rock: a true spiritual babel of voices.