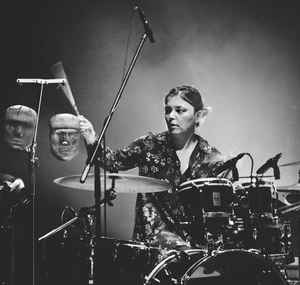 Profile:
Valentina Magaletti is a multi-genre Italo-British drummer, percussionist, and composer based in London, UK

Her principal project was one half of the duo Tomaga with bassist/multi-instrumentalist Tom Relleen. She is also a member of the critically acclaimed experimental pop quartet Vanishing Twin and the supergroup UUUU, along with Graham Lewis (Wire) and Thighpaulsandra (Coil). In 2017, she played drums as part of surviving Can member Irmin Schmidt's The Can Project, based around Schmidt's orchestral reimagining of classic Can songs and themes with an ensemble that also included Thurston Moore and Steven Shelley of Sonic Youth, Deb Googe of My Bloody Valentine, and original Can singer Malcolm Mooney. She and percussionist and sculptor Joăo Pais Filipe released their first album as CZN (Copper, Zinc and Nickel) The Golden Path in 2018, and a collaborative release with Swiss percussionist and composer Julian Sartorius, Sulla Pelle, followed in 2019.She is currently the other half of Holy tongue with Jungle producer Al Wotton, and producing music under her solo name and Due Matte.
Sites:
Wikipedia, valentinamagaletti.com, Bandcamp
In Groups:
AVVITAGALLI, Better Corners, CZN, Frequency Disasters, Holy Tongue, London Improvisers Orchestra, Moin (2), Tomaga, UUUU (2), Vanishing Twin
Variations:
Viewing All | Valentina Magaletti
V. Magaletti, Valentina Ma