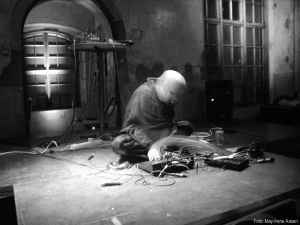 Bjerga has been touring Europe, Russia, Ukraine, Japan, Argentina and South Korea for many years. His incredible long form isolationist and cavernous tape-drone meditation have been released on more than 200 records across the underground spectrum. He’s collaborated with many artists, like Anla Courtis, Lasse Marhaug, Robert Horton, Culver, Posset and Adam Bohman. Lately he has been focusing more on collage work and the performative elements in his music, using tapes, re-wired toys, contact-mics, as well as snipptes from ordinary conversations and sounds from the everyday life in his concerts.
He’s also been running the Gold Soundz label since around 2000, having released about 120 records in all formats with artists from all over the underground spectrum.

He has also been giving workshops in electronic improvisation for adults and children, using always very basic components, such as contact-miked objects, always focusing on the action and the act of improvising with others rather than the ability to actually play instruments. He has held several workshops for children with special needs together with Anla Courtis.