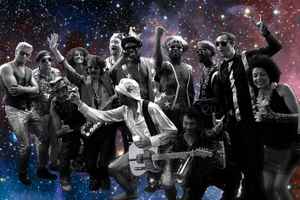 March 95 will point out five prolific years of the Malka Family and their fifteen musicians. All began in the late 80's when they developped the concept of the "Discomobile" (where everything cost 1 pound) and especialy the mythical club "Chez Roger, Boîte Funk" which was the first of this kind in Paris and which paved the way for today's wave of French funk/rap.

The Malka Family have three albums to their credit, the last of which (Tous des Oufs) was released on W.E.A. However, unhappy with their treatment in a major and afraid of loosing their cutting edge, they signed with Big Cheese Records and keep on being France's favourite funk mob. Much in demand for their mad live show, the Malkas average 60 gigs per year, filling venues of up to 5000 people. Now you have the history, we'll let the music speak for itself...