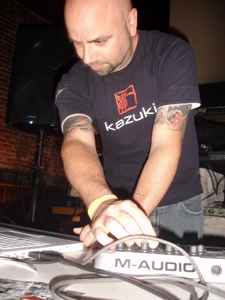 February 21, 2019
Steve Stoll is great! I just wish there was a recording of his very live set at the Twilo NYC. Someone from his label was even giving out Steve Stoll Blunted Boy Wonder rolling papers! I wasn't a convert yet to minimal techno but after that night I had a new appreciation for it. I was able to spot so many mistakes in his set which made it _very_ clear that all of the track playing was live on actual instruments. The patterns would often be off a measure and for some reason this gave me great joy as I was just beginning to understand the concept of how this music was made. It was a great night and if a recording ever surfaces, either bootleg or official, I will be overjoyed.
Reply Notify me 5 Helpful

...Steve Stoll gets down to the nitty gritty / brass tax of techno. Most of his vinyls dwell in my collection in great honor. He champions vinyl & remains a true hero

February 29, 2008
Dignity, taste, professionalism! Steve Stoll is the man I would put forward in terms of no nonsense non-over-complicated solid techno sound. He's like the American Thomas Krome and Oliver Ho
fusion in some ways. Who knows his work and what he represents with his excellent music surely know what I mean.
A long time running player who truly stands out of the
crowed with his strong uncompromising quality and somehow always fairly simple and professional sound at the same time. And also very gifted dj as well!
His endless work and efforts and blind belief in techno is remarkable and can be compared to only a few others. Lots of lots of respect to Mr. Steve Stoll!!
Reply Notify me 3 Helpful

This is one producer who has kept his original style throughout the years. He has a 'classical' aproach to techno not using too many sounds, overloading a track. One of my prefered artists when it comes down to live acts.