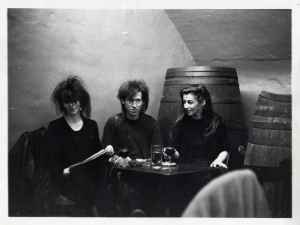 Profile:
The Hook ‘n’ Pull Gang were part of the late 80s indie scene in Edinburgh, Scotland. Described as “a cross between the Sex Pistols and the Ronettes,” punters remember the band as a strong live act. They were known for singing about the Texas Chainsaw Massacre, Burke and Hare and other dark subjects with a deadpan humour. They influenced other bands in the Edinburgh scene such as Goodbye Mr MacKenzie. The band also made an appearance on BBC Scotland's indie music television series FSD.
They released only one single, 1987s Pour It Down Yer Throat / Gasoline, before breaking up. In 1988 Rita Blazyca reformed the band with an entirely new line-up, including Sam Ireland with whom she would later form Die Cheerleader.
The band were reportedly making new recordings in studios in London in 2012, and there are rumours they may reform to play live again shortly.
Sites:
Facebook, YouTube, diecheerleader.com
Members:
Alan McDade, Alistair MacDonald (3), Calvin Burt, Dunc (5), Eileen McMullan, Rita Blazyca