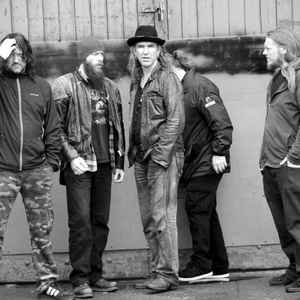 Profile:
With their roots embedded in the punk era, New Model Army were formed in Bradford, Yorkshire, England, in 1980, and immediately outlined their manifesto by naming themselves after the Sir Thomas Fairfax/Oliver Cromwell revolutionary army. The group was led by Justin "Slade The Leveller" Sullivan (b. 1956, Buckinghamshire, England; guitar, vocals), a former platform sweeper and Mars bar production-line worker, with the help of Stuart Morrow (b. 1966, Bradford, England) on bass guitar and Phil Tomkins on drums. Within a few months, Tompkins had been replaced on drums by Rob Waddington, and this line-up remained unchanged until the summer of 1982, when Waddington left the band and was replaced by Robert "Robb" Heaton (b. 1962, Cheshire, England d. Nov. 4th, 2004), a former drum technician and occasional drummer for the band Hawkwind. This line-up remained together until Morrow left the band for personal reasons, during the band's "No Rest" tour, the day after a concert in their home town of Bradford. Which was coincidentally the day of the Bradford disaster, May 11th, 1985 He was replaced on bass in the summer by Jason "Moose" Harris (b. 1968).

Their brand of punk folk/rock attracted a loyal cult following, much of which shared the band's grievances towards the Tory government policies of the 80s. This was best executed on their debut album, which combined militant themes such as "Spirit Of The Falklands" and "Vengeance" (a vitriolic anthem about getting even with one's trespassers) with the haunting lament for childhood, "A Liberal Education". The group's championing of traditional working-class ethics saw an unexpected boost for a dying art and trade - that of the clog.

New Model Army made their first public appearance at Scamps Disco in Bradford in October 1980. After releasing singles on Abstract Records, enjoying a number 2 UK independent chart hit with "The Price" in 1984, they formed an unlikely alliance with the multinational EMI Records, which saw the band acquire a higher profile and a significantly increased recording budget.

They eventually broke through to a wider audience with "No Rest", which peaked at number 28 on the UK singles chart in 1985 - a position they were never to beat in an impressive run of 12 UK chart singles between 1985 and 1991. With often inflammatory lyrics, the band have never compromised their beliefs for commercial gain.

They ran into trouble with BBC Television's Top Of The Pops show for donning T-shirts with the (albeit laudable) slogan, "Only Stupid Bastards Use Heroin". This attracted some derision from "anarcho-punk" traditionalists Conflict (2), who replied with their own motif: "Only Stupid Bastards Help EMI". They subsequently continued to release high-quality albums, with considerable crossover potential, always maintaining credibility with their original fanbase.

In December 1991 the group left EMI, eventually finding a new home on Epic Records. Their first single for the label revealed few concessions to the mainstream: "Here Comes The War" featured a picture of a charred body, and a pull-out poster instructing the user in how to prepare a nuclear bomb. In 1994, a dance remix of "Vengeance' was released as a protest against the Criminal Justice Bill. After a lengthy absence the band reconvened for 1998's "Strange Brotherhood". New Model Army's short spell with Epic ended as quickly as it started with the band prefering to self publish and go back to their roots. By 2000 their most recent studio album was ready. Named "Eight" it included a now familar, though no less effective, formula and energy.
Sites:
newmodelarmy.org, Facebook, Twitter, instagram.com, Wikipedia
Members:
Adrian Portas, Ceri Monger, Dave Blomberg, Dean White, Ed Alleyne-Johnson, Jason Harris, Justin Sullivan, Marshall Gill, Michael Dean, Peter Nice, Phil Tompkins, Ricky Warwick, Rob Waddington (2), Robert Heaton, Shir-Ran Yinon, Stuart Morrow
Variations:
Viewing All | New Model Army
N.M.A., NMA, Nma, Raw Melody Men, Us