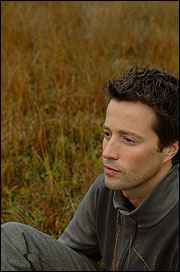 Real Name:
Tobias Meggle
Profile:
Sandboy, Tobias Meggle’s current project was formed after a productive period of 5 years as member of Beanfield. He quit the band in 2001 and now pursues his own artistic direction. One and a half decades of experience in playing with different bands, composing, arranging, touring, dj-ing and producing renewed his attention to the role of the human voice as a main source of song. Inspired words are combined with meticulously detailed treatment of the vocal’s surface, the song’s lyrics become explicitly musical gestures.

Meggle says: “My productions aren’t specifically aimed at the dancefloor. Whether someone happens to be dancing or not doesn’t make that much difference to me. I want adventure in the listening process, a whole spectrum of sensations – not experiment for its own sake. I see music as a weave of rhythms and resonance, textures and patches, melody and variation, singularities – a magic carpet of sounds that may take the listener elsewhere. The individual elements originate in nature, in the human voice, in physics, at the piano, in the studio, or in old scratched vinyl. They can be highly complicated or incredibly simple. They can also be both at the same time.”

Founded by Tobias, hinterland records mainly releases his own productions. The name hinterland reflects his choice to live and work in an old farmhouse facing the Bavarian Alps where he can tune into the diversity of natural and personal rhythms. The remoteness of the setting fosters a particular kind of focus in collaborating with singers and musicians. Hinterland records wants to open your ears to a whole range of music – nu jazz, brazil, or broken beat, call it whatever you like – music that has structure and texture, clarity and subtlety, voice and vision – with more than a nod in the direction of jazz, funk and club music, but it’s music to listen to, too.
Sites:
hinterland-records.com
Aliases:
Homegrown, Tobias Meggle