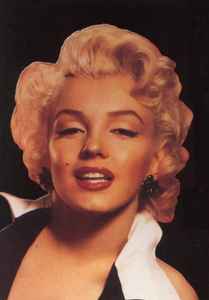 Real Name:
Norma Jeane Baker
Profile:
American actress, model, and singer, born June 1st, 1926, in Los Angeles, California, USA, died August 5th, 1962, in Los Angeles, California, USA. She was married to Joe DiMaggio from January to November 1954 and to Arthur Miller from 1956 to 1961.
The majority of her recordings (less than 30 songs in total) are culled from the soundtracks to the movies she starred in, and the rest for the occasional single release.

Marilyn died due to an overdose of sleeping pills. She was 36 years old. She is still regarded as one of the biggest sex symbols of the 20th century.

Rest... In... Peace... by crimsonmetal74
Artists performing under a pseudonym, stage name or nickname (a name other than their real or birth name) by Sacstracks
“VH1’s Top 200+ “Pop Icons” Of All Time” by crimsonmetal74
drug related artist deaths by 8m2stereo
Tu Cara Me Suena 1 [2011] España. by AaromGustinmondir
Favorite Artists by SoulDancer
View More Lists →