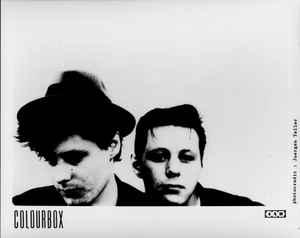 Profile:
Formed in 1982 by brothers Martyn and Steven Young, Colourbox drew on influences as varied as blues, soul, rock, dub and funk, they combined elements from each with movie dialogue and weird and wonderful samples.

Vocalist Debian Curry was recruited to sing on their 1982 4AD debut "Breakdown"; Currie was replaced by Lorita Grahame in 1983.

After releasing the mini-album Colourbox in 1983, they released a couple singles and began to work on their first full album, 'Colourbox', which garnered great reviews and topped the UK independent chart in 1985.
Colourbox's idiosyncratic approach to music left journalists struggling to pin down their identity; they deliberately stayed out of the spotlight and focused on refining their sound. Two singles followed in 1986; 'The Official Colourbox World Cup Theme' and a reworking of the Augustus Pablo track, 'Baby I Love You So'.

It was in 1987 that the Young brothers broke out of the indie charts as M|A|R|R|S, with the genre-defining track, 'Pump Up The Volume'. A collaboration with A.R. Kane, Chris CJ Mackintosh and Dave Dorrell, the single went from underground club anthem to UK National No.1. 'Pump Up The Volume' marked the beginning of the sampling era.

Whilst driving one night; Greg: "What's this playing? I've never heard anything like it before." Greg going wild in the back seat to COLOURBOX. Loud. Perfect music for any mood. I took Colourbox for granted as quite a few bands 4AD were releasing in the early eighties made you think WOW, this is perfect, many new types of music . . . But what Greg said made me think of Colourbox from an outsider’s perspective. He was right, Colourbox is mind-blowing stuff, impeccably produced.

Colourbox is a difficult group to describe, they touched so many genres and were at the front of some new ones (cutting, sampling . . .). Sometimes, they improved on what they were referencing, like the Philip Glass track. And I have no idea why the official world cup theme wasn’t used formally for football.

Both 'albums' (the first is really an EP, though a bit longer than most) are just labelled Colourbox. I like the more experimental first EP, as it was a great teaser for the music to come - experimental noises, changing tempos and abrupt changes in beat really made you pay attention. The EP is a bit like an orchestra tuning up at the beginning of a concert – a prelude, therefore, for the up-coming long playing album (be sure to get the free extra disc with it).

The Say You 12" is a beautiful song. There are wonderful covers of classis like Baby I Love You so, Keep Me Hanging on. But then the Youngs could also write their own instant classics such as Arena and The Moon Is Blue. Then when you had enough of that sound it would change to the speedy Just Give ‘Em Whiskey, Hot Doggie . . . with bits of popular culture references taken from all sorts of places to add to the fun (Escape from New York, Joan Collins . . . ).

The odd thing about Colourbox is how their music was released in a mixture of album and ‘single’ formats (Eps). Although there is only one proper long playing album, there are quite a few 12” releases, all of which are important additional pieces to the Colourbox collection. At that time, a lot of 4AD 12” EPs were independent / separate pieces from the albums (this policy changed with the advent of the American groups, Throwing Muses, Pixies etc . . .). The result is there is a lot to collect. If you don’t have all the Colourbox vinyl, the CD box set (CAD 3204 CD) is a good reference. This set should also have been made available on vinyl, but probably because of the way Colourbox sporadically released their music in smaller formats, it’d be expensive to produce a proper vinyl box set worthy of Colourbox’s fine work.

[There is also, the museum collection, TADD 3443.]
Reply Notify me 5 Helpful

May 7, 2019
Ahead of their time, one of a handful of groups that defined the sound of my youth. R.I.P Steven
Reply Notify me 5 Helpful