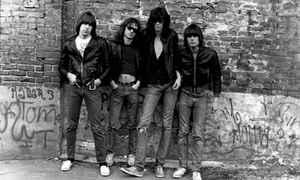 Profile:
American punk rock band formed in 1974 and disbanded in 1996.

After Tommy left the band in early 1978 he was replaced by Marky Ramone (Marc Bell). He was fired in 1983 and was then replaced by Richie Ramone (Richard Beau). In 1987, he then left the band and was briefly replaced by Elvis Ramone (Clem Burke) for two performances (August 28 & 29, 1987) before Marky returned in September, 1987. In 1989, Dee Dee left and was replaced by C.J. Ramone (Christopher John Ward).

In 2001, Joey Ramone passed away, a victim of Lymphoma. The following year, Dee Dee died in Los Angeles on June 5th, 2002. Johnny Ramone died in his sleep in Los Angeles on September 15th, 2004. Tommy died 10 years later, on July 11th, 2014, making him the last original member of the Ramones to die.

December 28, 2022
Check my Library for some inspirations for your private collection. :)

Most successful "Outsider Musicians", suck it Daniel Johnston. Johnny Ramone had the most FAS face of the lot but none of them appeared to be free from the effects of prenatal alcohol. 1234!

The Ramones saved my life. It's true. As a teenager they were not musicians or artists for me, but some kinda superheroes. Theirs was not a musical career, it was "The adventures of The Ramones!". The overcoming of the unfitted and disordered. A lesson taught and learned: you don't have to be nice, just be yourself. They were unique, a fabulous beat that still (and always) turns on my mind and my heart. Love 'em. Forever. To death.

The Ramones was the greatest Rock n Roll Band ever & they are my #2 favorite band of all time. I've got
their first 10 albums on vinyl plus a half a dozen others on CD. Their music was so simple, yet so inspiring &
uplifting. I managed to see them at Lallapalooza '96 I think it was, before they broke up & then died off.
Thank you Joey, Johnny, Dee Dee, Tommy, Marky, Richie & the others for over 30 years of fantastic music.