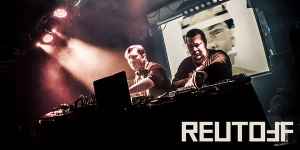 Profile:
The three main Reutoff members - WoWa [BT], Arnold pR, and Mitya N have decided to make industrial music in summer 1998. Before that, they already played together in different projects of various styles with various names. All of them were born in small suburb of Moscow called Reutov where they still live nowadays. They think that there are plenty of unique, really magic places in the town and around, that forms a united sacral space which is able to stimulate creative activity like nothing else can.