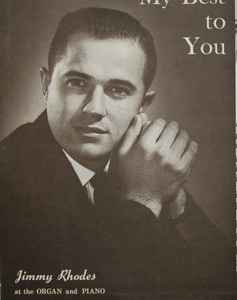 Profile:
Biography
Jimmy Rhodes, a multi-talented musician, is a well-known performer and businessman. A gifted keyboard stylist on both piano and organ, he is also an accomplished brass performer. Although he started his career as a music educator, teaching at two academies in California, he has since been involved in a variety of music related activities, including professional performance, recording, composing and arranging, accompanying, operation of music stores, and music therapy.

Rhodes was born and raised on a cotton farm in Chesterfield, Tennessee, where his parents were sharecroppers and he was known at age seven for being the best cotton picker in the county. When he was nine, his parents became Seventh-day Adventists. At that time, his mother talked his father into buying an old, used upright piano for $100. She ordered a music correspondence course, learned to play hymns on the piano, and then taught her son how to read music and play the instrument.

Although he initially resisted being a musician, Jimmy learned quickly, and by the time he was ten, he was playing for services, weddings, funerals, and other events. From 1950 to 1952, he attended Highland Academy in Tennessee, where Terry Trivett, a younger student at the school, later recalled Rhodes as the "most talented person anyone in that area knew. He thrived on playing several instruments, sometimes more than one at a time. He exuded talent."

Jimmy moved to Collegedale, Tennessee, where Southern Missionary College, now Southern Adventist University, was located and continued taking lessons on piano from Lourene Sykes, a friend of the family. By this time, he had became interested in brass instruments and learned to play the trombone on his own. He later described that experience:

I remember being fascinated watching someone playing the instrument, intrigued by the movement of the slide and how it changed the notes. I immediately purchased one and familiarized myself with the slide positions by reading an instruction book. After gaining proficiency on a regular-sized instrument, I later purchased and learned to play the more demanding soprano trombone, where correct slide positions are even more critical.

Norman Krogstad's conducting of the SMC concert band had inspired Jimmy before he arrived at Collegedale. By the time he was a junior in nearby Collegedale Academy, he had become a proficient brass player and was invited by Krogstad to join the college band, in addition to playing in the academy band.

Rhodes studied brass with Krogstad as he entered SMC as a music education major, inspired by both his teacher's personality and musicianship. Two years before he graduated, Krogstad accepted a position elsewhere, and Burton Jackson, a virtuoso marimba player, became the college band director. Jackson also proved to be an inspiring mentor.

Following graduation from SMC in 1959 with a B.S. degree in music education, Rhodes became band director at Lynwood Academy in California, a position he held for the next three years. During this time he started graduate work at the University of Southern California, where he completed a master's degree in music in music education, writing his master's thesis about how music affects people's behavior. He also taught at Orangewood Academy for a year.

In 1970, Rhodes moved to Cleveland, Tennessee, to assist Forrest Preston, a friend who was starting a nursing home management company that would become known as Life Care Centers of America. A year later, he returned to California, to pursue a career as a musician, performing in evangelistic crusades, assisting various artists, playing for Faith for Today, a religious telecast, and appearing as a guest performer with the Lawrence Welk Orchestra.

Rhodes was a guest organist in Welk's group and did keyboard work for Jimmy Roberts, one of Welk's singers, accompanying him as he sang in different venues, including the SDA church at Vallejo Drive in Glendale, California.

In 1973, he married Pam Chanslor, a talented mezzo-soprano he had met at a camp meeting in Albuquerque, New Mexico, her hometown. When they married, she was attending Loma Linda University, La Sierra Campus, in Riverside, California.

The Rhodeses returned to Tennessee in 1978, so Jimmy could assist Preston with his growing nursing home and retirement company. Jimmy then returned to teaching, developing band and choral programs in that area.

Preston's company continued to grow, and, persuaded by Rhodes that a full-time music director would be beneficial, he hired him to serve in that capacity. In that position, Rhodes has since developed a number of highly successful music-related programs and services in a company that now includes 260 facilities in 28 states.

As Director of Music Services for LCCA, Rhodes travels nationwide, performing for events sponsored by the organization, playing for residents in its facilities, and serving as a music program consultant. He has developed a number of resources, including manuals with tapes and games, albums of organ and piano music, an exercise video, an electric piano programmed to play special discs, and other aids. He also records quality customized CDs of music tailored to serve the special needs of the many residents in LCCA's homes.

Rhodes is an outspoken advocate for the importance of music as a unique form of communication, an enhancement for worship, an escape from unpleasant realities, and a tool for motivation. His earlier research for his master's degree thesis had led to a realization of the power of music. He later commented about that experience, music's timeless qualities, and its importance in the work of LCCA:

While doing my master's thesis, I witnessed the effect of music therapy on disabled children, read about how the brain is affected by music, and volunteered to play worship services at nursing homes. Even now I try to find out what each resident responds to - what stimulates the brain and causes them to reminisce.

I have found that as we age, music does not lose its significance. In fact, its therapeutic effects often provide greater inner harmony, making it a key element in nursing and retirement center programs. I have witnessed firsthand some amazing results for persons who have had strokes or are Alzheimer's patients and could not be reached in any other way.

He and his wife have also worked in evangelism for a number of years. Their collaboration with John Carter in evangelistic outreach, which started in Fort Worth, Texas, in 1986, has taken them throughout the U. S. and to the Ukraine. The Rhodeses and Carter have appeared a number of times on the Safe TV broadcasting network as musicians and speakers, respectively.

He and Pam have been participants in the Family Reunion Concerts, a series of programs that have featured as many as 100 Adventist musicians and groups singing and performing gospel and other religious music at different places around the country. Fifteen different reunion programs have been presented over a period of six years.

He has made numerous recordings, the first being on the Chapel-Bridge label in the 1970s. In the years since, he and his wife have released numerous successful recordings in formats that have evolved from vinyl records to audio and video tapes and to CD's and DVD's (see discography at the end of this biography).

They produced two DVDs, Friendship with Jesus and Purely Music. Friendship with Jesus, a live concert, won an Angel Award in 2004. Purely Music was a 2008 winner of a Telly Award, selected from over 350,000 entrants that year. This DVD was a musical program they had produced for the Safe TV network in the previous year.
Variations:
Viewing All | Jimmy Rhodes (3)
Rhodes