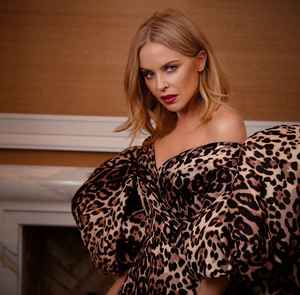 She first came to global attention with her role as Charlene Mitchell in the soap opera "Neighbours." She began her music career in 1987 when she signed to Mushroom Records and released a cover-version of Little Eva's "Locomotion," which spent seven weeks as the Australian number one. The success of "Locomotion," lead to Minogue travelling to the UK to record with pop producers Stock, Aitken & Waterman, with whom she worked until 1992. In 1993, she signed with dance label Deconstruction, a move that was marketed as the start of a new phase in her career. The distance from her SAW-managed sugary past was highlighted, and her credibility boosted, in 1995, when she collaborated with Nick Cave on the murder ballad "Where The Wild Roses Grow."

After leaving Deconstruction, Minogue signed with Parlophone in April 1999, with whom she released the albums "Light Years," (2000) and "Fever," (2001) both of which proved enormous commercial and critical successes. In 2005, Minogue was diagnosed with breast cancer, putting her career on hiatus for 18 months. Following treatment and surgery, she resumed her "Showgirl Tour," in Sydney on 11 November, 2006.

In 2008, Minogue received an OBE from the Queen of England, not long after which she received the French cultural award, the “Chevalier de L’ordre des Arts et Lettres,” insignia (‘Knight’ in the Order of Arts and Letters). Her tenth album "X," (2008) was nominated for Best Dance Album for the 51st Grammy Awards. In 2008 she did a world tour, and in 2009, toured the USA and Canada, exclusively. She released her eleventh studio album "Aphrodite," in 2010, her fifth with Parlophone. Inducted into the ARIA HOF (Hall Of Fame) on the 27th November, 2011.

In March 2012, Minogue began a year-long celebration for her 25 years in the music industry, which was often called "K25." The anniversary started with her embarking on the "Anti Tour," in England and Australia, which featured B-sides, demos and rarities from her music catalogue. The tour was positively received for its intimate atmosphere and was a commercial success, grossing over two million dollars from four shows.

Kylie is an underrated artist, period. The critics never saw her coming, they despised her and her bubblegum pop from day one but she not only showed them all and the world that she was not a one-hit wonder or just a puppet of the Stock-Aitken-Waterman production team (she survived almost all of their produced artists altogether) but she is an artist who was never afraid of taking chances (hello, even Madonna/Mirways kind of copied her since they couldn't not know her 1998 song "Cowboy Style" when they made Madonna's hit "Don't Tell Me" in 2000).

So yes, at first, Madonna probably inspired her (that much is obvious in her clothes during her Let's Get To It tour in 1991) and the fact that she also used, just like Madonna, outfits from Jean-Paul Gauthier and musics from Stuart Price but she's doing her own thing now for a while and whether people who despise her wouldn't dare to admit or not but in pop she's a force to be reckoned with and for more than 30 years now. Not bad for a supposedly one-hit wonder, isn't it ?

I'm a big Kylie fan since 1988 and even though I didn't agree with her all experimentations (the Deconstruction period was very hard on me even though I warmed up to it later on) but except from the country album and the occasionnals christmas records that I didn't bought (they are so many of them, I stop counting) but I bought everything else from her (even the countless compilations) and I stand by her, no matter what and I'll always will for as long as she will sing because she brings endless joy and sprinkless in this depressing dark world of ours.

And you know what makes her so special ? It's that on top of everything she seems like a very nice girl. And even though since the end of the Stock Aitken & Waterman days she tried very hard to make us forget her "girl next door" image she can't because that's what she is. Maybe one of the very few nice girls in pop music. And that's why she will always be relevant whether she makes dance, pop, edm, country music or r'n'b.

Kylie Minogue is an underrated true Pop Survivor. She was an 80s product, almost nonexistent in the 90s, but suddenly she is everywhere & stronger in the 2000s and so on. She was also barely recognised in the USA, but she got tremendous success outside of US, especially the European, South American and Asian market.

Judging from her last album Golden, Kylie as always, delivers kick ass catchy songs, quality production and yet, always enthusiastic to embrace new sounds. Plus, she's willing to share her fame with countless featurings and collaborations with other artist, composers and DJs which also found their each respected success.

her failer with this album (Golden), simply put is with its producer/s not a clear direction really,and/or strong song structure;If she truly wanted to make a hybrid album of country dance fusion and or club country than golden should of had more qualified producers (i.e Mutt Lange or even Dan Huff.)If kylie had moved in a direction of country disco that of the late seventies,early eighties (i.e barbra mandrell/sylvia/T.G sheppard)I believe it might of worked,especially with a generation not knowing it.Lilly allen had the right idea with her Canadian hit (it's not fair),very much in the country disco/urban country genre.Madonna if only had this hot potato of an idea in the early 2000s (don't tell me);imagine don't tell me as a urban country/disco country hit during discos and dances resurgence of the late 90s early 2000s

February 12, 2015
kylie fans will like her debut single. two songs were done before her SAW days. the australian mixes of locomotion.SAW mixed it for the UK and called it loco-motion. ausralian mixes include chugga.motion and boy meets girl. the australian release has a non SAW song called "glad to be alive",this was written by ex-members of aussie new wave group"kids in the kitchen".
See 2 replies

May 9, 2014
Big fan here, even since her SAW/PWL days in the late 80s...her Light Years, Fever & Aphrodite albums are dance pop classics. Girl has got it goin' on!

Who ever thought that after that odious collaboration LP with M-People,and others for Deconstruction (they practically ruined her)...she'd bounced back giving musical lessons left-right-&-centre to anyone who stands in her way, as well lessons in how to behave as a pop-star and who one should surround themselves with...Madonna and Britney Spears and their like, can all take note of how things should be done. Understandly she won't get too much airplay in the USA, cos' if she did what would become of Christina Aguilera, and all those r'n'b wannabes that the states is so full of...Body Language is not only a great pop record, it packs a punch and is full of wonderful collaborations. It could be the final nail in the coffin for artists like Mariah Carey, Prince, Whitney Houston etc who have somehow all lost their ways along those egomaniac roads they were travelling down - cos' Kylie on this album takes on all of them and at their own game without as much as batting an eyelash - and succeeds where they have failed, to arouse excitement and bring fun back into pop. Kylie please just stay way from the L.A. scene, and all those Puff Daddy's of the world but any remix by Mark Picchiotti, Roger Sanchez, Superchumbo etc is greatly appreciated...