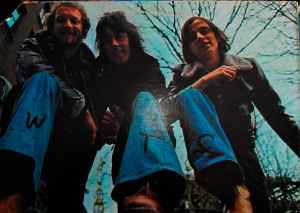 Profile:
British funk - rock-jazz fusion band active in the mid '70s. The band's name is often spelled in capitals but it's not an acronym or abbreviation, making Upp a possible spelling as well. The group consisted of Stephen Fields (aka Stephen Amazing, bass guitar), Andy Clark (keyboards) and Jim Copley (drums) ; David Bunce (guitar) joined on guitar for the second album. The group were signed to CBS in 1974 and the debut album "Upp" was released in 1975. Jeff Beck produced it and also played guitars on it, although there was no mention of him playing in the liner notes. Upp released its next album a year later, titled "This Way Upp". Beck again produced this album and played guitar solos on "Dance Your Troubles Away" and "Don't Want Nothing To Change". This album was recorded at CBS Studios, London. The group's track "Give It To You" contains one of the most popular breakbeats of all time.
Sites:
Wikipedia
Aliases:
UPP-The Jeff Beck Band
Members:
Andy Clark (13), Jimmy Copley, Stephen Fields (2)
Variations:
Viewing All | UPP
UPP - The Jeff Beck Band, Upp