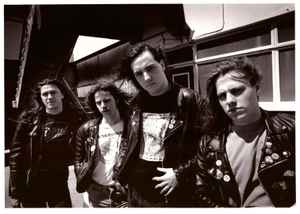 Profile:
The Beyond were a Derby, England quartet. John Whitby (vocals), Andy Gatford (guitar), Jim Kersey (bass), and Neil Cooper (drums) came together in 1988 and made two releases on Big Cat before signing with EMI subsidiary Harvest for the release of 1991's Crawl. The band switched to Music for Nations for their second effort, Chasm, in 1993.

Vocalist John Whitby later became the Labour Mayor of Derby, and while serving as Mayor, the band reformed on 16th February 2018 for a charity concert in Derby, at The Lounge, to raise money for his chosen charities.
Sites:
onesteptoofar.co.uk, Wikipedia, YouTube
Aliases:
Gorilla
Members:
Andy Gatford, Jim Kersey, John Whitby, Neil Cooper (2)
Variations:
Viewing All | The Beyond (3)
Beyond

November 6, 2020
I really wish someone would get Manic Sound Panic out on CD - or even Bandcamp, or a retrospective CD package of early ep's etc. Such an underrepresented band.

October 5, 2018
Completely agree with the other comments, I found Coopers drumming utterly captivating! You can tell that boy knew his Rudiments!
A class act, and a shame nothing more came of it. 1st class musicianship.

December 28, 2014
How I wish this band had continued beyond the two albums. Beautifully rich, intelligent and emotionally complex progressive metal with none of the wankiness that term implies; political lyrics, interesting song structures, an experimental attitude towards style and genre...Jim Thirlwell on production duties for Chasm was a stroke of genius (one which didn't work all the time, but for most of the album made something so forward thinking as to still stand positively 20 years later)...but fatally let down by the industry.

April 14, 2012
The first group which managed to combine prog rock with grunge (ahead of Tool) but had no luck or no money for promotion and eventually fell to obscurity.