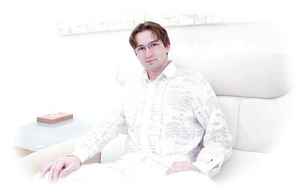 Real Name:
Marek Adamczyk
Profile:
A.M.Samurai took up music seriously in 1999. The type of music that he creates is quite vast within the electronics sphere. He primarily composes quick tracks in Spacesynth style. His slower numbers are more like Enigma and Schiller.

His first foray into music was in 1999 at the club Qvo Vadis in PKiN in Warsaw. Early on A.M.Samurai created music for the dance group Energy. In the year 2000 he started work for AXIS Records (now Alpha Centauri). In time he created known tracks such as "Welcome To Space", "Exploration", and "Cold Memories"

In 2005 "Star Of Happiness" was awarded second place in the Spacesynth Contest. It was later released on the album Spacesynth Contest Traxx. It was whilst working on this contest track that A.M. Samurai began collaborating with VM-Rexor in making short films, this led to the first video clips for him. He also has created music as well as news material for the site www.sandra.org.pl as well as advertisements for the known anti-virus program Arcavir

There were many factors which halted the production of his album in 2006, however under the new banner of Spacesound Records, work began in earnest in 2007. While working for the new label A.M.Samurai churned out a Chilli-out remix of Depeche Mode’s "The Things You Said". This track featured on the album Synthesizer Tribute To Depeche Mode. A.M. Samurai has worked with various vocalists, notably with Monika Adamczyk, Aneta Antkowicz, Daniel Pettersson, he also works with session guitarist Henry.

In March 2009 whilst working with vocalist Anette, he created the clip Game 42, this has acted as a promo for his forth-coming debute album The First Element released10th July 2009. The next installation for A.M. Samurai is to release a Chill-out album.
Sites:
web.archive.org, MySpace, Facebook, YouTube
Aliases:
Marek Adamczyk
Variations:
Viewing All | A. M. Samurai
A.M. Samurai, Samurai