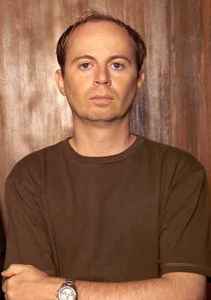 Real Name:
Ramon Zenker
Profile:
Ramon Zenker (the member of Hardfloor, Fragma and other projects) is a German techno-artist (playing ambient, acid, break beat, trance etc.), remixer and producer. He worked with Mike Oldfield, Paul van Dyk, The Shamen, Scooter, Mylene Farmer, Jam & Spoon, Depeche Mode, Yello, New Order and other stars.
Ramon started playing keyboards at the age of 12. Although he also started playing bass-guitar synthesizers soon became his main interest. After countless projects and live-performances he had his first chart-hit with Honesty 69 - French Kiss in 1989. Many hits and projects followed such as Perplexer, Interactive, Celvine Rotane, Bellini, Paffendorf and other.
In 1996 Zenker together with Andreas Schneider and Olaf Dieckman co-wrote and co-produced Thomas Anders' solo project Phantomas.

Wow... nobody wrote a comment till today because of Ramon Zenker.
I give Respect to his musical art - he has collaborated with so many different artist in the past not very much dance musicians have the same... this shows the respect other artist from all over the world feel to him.
In my opinion Ramon Zenker is one of the biggest German artists.
Often more in the background but his appearance in genres like Techno, Acid or Dance, sometimes Euro Dance, in doing music together with other talented artists like Oliver Bondzio, Jens Lissat and others is in a decently number really great. Some of the Remixes he was involved in got big Clubhits which are played still today. His direction is often mainstream oriented but in this case it was no fault... especially in the ending of the 80s and start of the 90s the Dance Music Scene got sight of a serious new star of hard and frontal but also well straight melodic sound.
This man has a big musical influence on tracks like 'Acperience' (with Oliver Bondzio, honored by ROLAND) - one of the diamonds of the Acid genre: the 'acid sky' happens even on MTV (! check yt to see two acid heads seesawing in the fog)... It has not been there before - hypnotic, near-Goa, straigt minimal acid weddings with several 303s running full sound..its just a Acid trip you never forget if you are into Techno and similar styles... nowadays music is surely more full in sound quality, but in the years after the first release it could keep the magic. And still today the track works...because it does not need the most hip-styled full blowed sound effects if you give a simple but effective idea.
What Marc Trauner (aka Marc Arcadipane) is for German Hardcore, Ramon Zenker is for the genre of more commercial directed Dance Music. Both are related to Hesse/Germany.
In my generation the first contact with Zenker tracks was with 'Mr Matey - Acid Party', 'Honesty 69 - Rich In Paradise' (he did some great mix works of the original), I was just overwhelmed by this atmosphere: 'Interactive - The Techno Wave' (what a jewel...), 'Dildo' (hard techno/tekkno-fun: don't take it to serious but just have fun with it ;D), 'Who Is Elvis' (what a surprise when listening to this the first time in some HR3 Clubnight, where later Sven Väth, Marc Spoon, Dj Dag and others celebrated their success. The track was boldfaced and heavy) a.s.o. ... . Tracks like 'Who Is Elvis' sounds dated today but when released it was the bold, groovy sound of sawtooth-wave with 909... and the open minded dancers all over the planet (who had no problem to listen to Underground AND Commercial Dance) welcome such sounds. Surley - it was the beginning of the years where Dance was splitted in different styles like Underground Techno, Hardcore, Acid, Hardtrance, Drum & Bass, UK Hardcore, Rave, Gabba but also the ending-era where all those styles still were played together in one set. Where Underground Resistance e.g. made serious sounds with high quality and tried to give a political message, Ramon Zenker produced mainly harmonious top composed tracks and releases to have fun with and which should not be taken to serious.
In a lot of Ramon's tracks the music-enthusiast feels Zenker's love to powerful and round sounds created to make the dancers freak out to and forget the last 5 working days. Thank you for doin a great job...