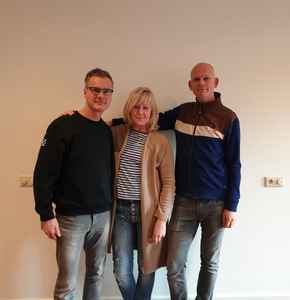 Profile:
Dutch trance group formed by Carlo Resoort (born March 1, 1973) and Jan de Vos (August 9, 1974). Resoort is the producer while De Vos DJ's under the name DJ 4 Strings.
For many years, it has been believed Vanessa van Hemert joined the group in 2001 performing vocals on the track "Take Me Away (Into The Night)" and on the following two albums with the group; Believe (2003) and Turn It Around (2004), the latter on which she supposedly performed vocals on three tracks. In January 2005 it was announced that Van Hemert had left the group.
However on April 5, 2019 it was revealed by both 4 Strings (on Twitter) and Susanne Teutenberg (on her Facebook page) that she was indeed the original vocalist of 4 Strings since the beginning. This coincided with the release of 4 Strings & Susanne Teutenberg - A Brand New Day.
Sites:
web.archive.org, web.archive.org, web.archive.org, web.archive.org, Facebook, Twitter, MySpace, Wikipedia, SoundCloud
Aliases:
Blue Finger, D'Tech
Members:
Carlo Resoort, Jan De Vos (2), Vanessa Van Hemmert
Variations:
Viewing All | 4 Strings
4 String, 4-Strings, 4Strings, 4strings, 4strings+, Four Strings, Strings

January 25, 2019
The data here should probably be updated to reflect that the vocals on the Vanessa Van Hemert releases were actually sung by Susann Gesang. See the Vanessa VH Fan Club page on Facebook for more info.

This is one of my favorite groups ever. Their music is always so powerful and its always top class. Their biggest track must be "Into the night" that many djs have destroyed the dancefloors with. 4 Strings does vocal and unvocal tracks and i have to say that the onvocal tracks are the best. Everytime theres a new producion of
4 Strings i know its gonna be massive. One of the brightest stars in the EDM world...