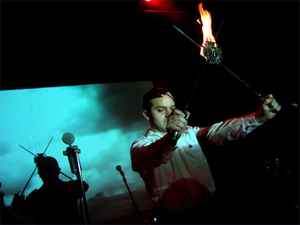 Real Name:
Eric Konofal
Profile:
Les Joyaux De La Princesse (English: "The Jewels of the Princess") is a French one-man industrial/ambient/neo-classical project active since 1986. The music on his releases varies from heavy industrial noise to melancholic music for organ and piano mixed with historical French speeches. Each record is a sort of small audio document focusing on a single historical event, cultural moment or important personage, usually from France in the 1930s and 1940s. Most of them are sold-out and sought-after collector items due to the small number of copies pressed and the extravagant packaging. The project was closed in 2010.
Sites:
chronoglide.com
Aliases:
La Voix Des Nôtres
Variations:
Viewing All | Les Joyaux De La Princesse
LJDLP

Interesting note is the person behind this project is a physician, researcher, and expert in the field of sleep disorders and ADHD. https://nlspharma.com/about/team/eric-konofal/
Video interview in French about his professional work: https://www.allodocteurs.fr/archives-hyperactivite-quels-sont-les-effets-secondaires-du-traitement-1975.html

August 13, 2019
If you plan to buy the ultra mega super limited collector UNOFFICIAL edition of one of the LJDLP piece.
Think you can do yours for a reasonable price with a few craftsmanship.
But please don't sell it here.
At least don't buy it!

September 1, 2017
Just noticed that Discogs blocked sales for any release marked as unofficial. While it's a pity for certain historical bootlegs, in the case of Les Joyaux De La Princesse it's a grace! No more will unreasoning bootleggers sale horrible CDrs or 7"s with compilation tracks pressed on them. While I don't agree at all with the politically correct censorship applied to several records and artists, the blocking of unofficial releases in the market is very welcome news.
See 2 replies

I would to say about bootlegs from lives: The reason why you could appreciate them is essentially because you could hear some goods tracks only present on these "documents" (new orchestrations, new lyrics and sometimes sadly the stupid remarks from the audience).
BUT I totally agree (and it reflect only my personal opinion) there is something unpleasant about those prices who reflect a sad side of human behavior. Even if I grant, some (but a few) bootlegs are made with "devotion", noble intentions, honesty with beautiful packaging and an effort given to details.
If you just want to hear these documents (and don't care about "luxury" packaging -you can made yourself for the tenth of the price- and enrich opportunists) think about a noble human quality: the sharing.
I'm sure Dr. Erik Konofal would not mind.
Anyway, a great artist with a strong esthetic regardless of any political interest.

EDIT: Oh and some of these bootlegs have very poor sound quality!!!

Not music but sonic documents. Like Proust's biscuit in the coffee. Excellent.