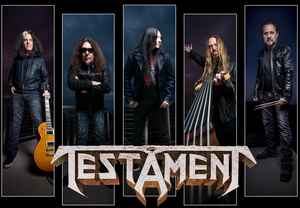 Initially founded as Legacy (27) in 1983 by Eric Peterson (guitar) his cousin Derrick Ramírez (guitar and vocals) and Mike Ronchette (drums). Same year Steve "Zetro" Souza joined as vocalist, Gregg Christian as bassist and Louie Clemente replaced Mike on drums. In 1984 Alex Skolnick replaced Derrick on the guitar and they began rehearsing for their first demo.

In 1985 they recorded their first demo called "First Strike Is Deadly" and in 1986 they changed their name into Testament after parting ways with Zetro (who left to join fellow Bay-area thrashers Exodus) and hooking up with new vocalist Chuck Billy. After the successful debut album "The Legacy" they played the Dynamo festival in Holland and recorded a live EP. Their second album made Testament one of the world's biggest metal bands and a tour was arranged with Megadeth, Voivod, Anthrax, Judas Priest and others. Their third album "Practice What You Preach" sold more than 400,000 copies.

After the release of 1992's "The Ritual", Louie Clemente and lead guitarist Alex Skolnick left the band and were replaced by guitarist Glen Alvelais and drummer Paul Bostaph, both from the band Forbidden. In 1995, after more line up changes which included guitarist James Murphy replacing Alvelais and a few different guys behind the drums, the band was dropped from Atlantic Records and they therefore decided to create their own label called Burnt Offerings Inc. In 1996 Testament split up during the pre-production for the seventh album. Chuck told that he and Eric would form a new band called Dog Faced Gods while James left to do a personal project and Greg formed the band Flangue. However Eric and Chuck soon resurrected the Testament name with various players. 1997's "Demonic" featured founding member Derrick Ramirez (playing bass) and drummer Gene Hoglan. 1999's "The Gathering" saw the return of James Murphy, along with bassist Steve DiGiorgio and former Slayer drummer Dave Lombardo.

In 2005, after several years of playing with different line ups and Chuck's battle with cancer, he and Eric reunited with "classic line up" members Alex Skolnick, Greg Christian, and Louie Clemente for a series of show which resulted in the release of a live album. Moving forward, the original members opted to continue working together, with exception of Louie Clemente, who was unable to commit to the band full time and was replaced by ex-Dimmu Borgir drummer Nick Barker. Barker's tenure was brief, as visa problems prevented him from working in the US, and he was replaced by Paul Bostaph.

Testament began recording their new album, Dark Roots of Earth, on June 20, 2011. Paul Bostaph was unable to take part in the recording due to a "serious injury"; however, he was expected to rejoin when the band tours to support the album. Gene Hoglan, who played drums on the band's 1997 album Demonic, filled in for Paul on the drum tracks. It was announced on December 1st that Paul Bostaph left Testament. Gene Hoglan recorded the drums tracks for Dark Roots of Earth and continues to play live with the band. In interviews, Testament have expressed pleasure in Hoglan's playing, and a hope that he will continue with the band for the foreseeable future. In 2014, it was announced that Testament and Greg Christian had parted ways.