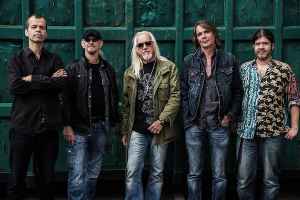 Profile:
Amongst the longest running bands of German rock, Birth Control were formed way back in 1968 in Berlin. They chose their rather controversial name as a stab at Pope Paul's anti birth control policy.

October 29, 2022
As a reply to the 43-year-old article below, I'd like to say that most people I talk to in Sweden and Germany consider Hoodoo Man to be their tour de force, and that Increase was their last interesting album. The last one I bought was Here And Now (2013). At a concert in Bremen some 20 years ago, we bought some fine, 70s bootlegs though, and the show (a double concert, shared with Jane) was more than decent (I preferred Jane though, whereas my older friend voted for BC, a band he'd listened to since their 1st LP, while I was a Jane fan since 1979), and we saw them once more at Sweden Rock Festival in 2008, my 15th and last SRF*.

*) It had turned into a metal festival - and also my skoliosis got worse on a 14-hour bus ride from Accra, Ghana, to Abidjan, Ivory Coast, in April 2002 that cost me a herniated disc. I'm an old fart...

Birth Control were, from the start of their career, tipped to be one of Germany's top rock acts. They were originally formed in late '68 by Bernd Koschmidder (bass), Reinhold Sobotta (organ), Rolf Gurra (sax, vocals) and Egon Balder (drums). Egon left in 1969, and Bruno Frenzel (guitars, vocals) and Bernd Noske (drums, vocals) joined. With a lot of talk by Pope Paul about abolishing the pill and other forms of contraception, they thought that the name Birth Control would be an appropriate way of protesting against his ideas, and this move led them to be classed as an underground group. They did several club tours and Metronome records signed them up. Rolf Gurra left before they recorded their first album.
Shortly afterwards, Birth Control changed labels, joining the then new progressive Ohr label, who released OPERATION. The majority of the material was penned by Bruno Frenzel, and a straighter rock approach was used. This album has one drawback - the disastrous twelve minute Let Us Do It Now. The band then left Ohr and Reinhold left the band. Ohr promptly released a compilation including three previously unissued recordings, one being called Believe In The Pill, which gave the set its title. At this time, Hartmut Scheulgens (keyboards) joined, but he was soon replaced by Wolfgang Neuser (ex Mushroom), who brought a new influence into the group. Signing to CBS, they released the highly successful HOODOO MAN. Wolfgang's influence is highly noticeable on this album with his haunting organ work on Gamma Ray and the Hoodoo Man track. Wanting to progress more, he left the rock-based confines of Birth Control. The last original member, Bernd Koschmidder, also departed. Zeus B. Held (keyboards), Peter Foller (bass) and Dick Steffens (guitars) joined and recorded the aptly titled REBIRTH, which saw them moving into new styles again. The outstanding track is Back From Hell, with Noske showing off on Moog drums.
With a major tour lined up, in the spring of 1973, Dirk Steffens left, and after his departure they recorded a double LIVE album. The tour and album were acclaimed by the German rock press as 'The greatest rock show ever' (Musicmarkt), and they said 'The band blew it's mind - the audience did the same' (Musik Express). No wonder, because the album contains some of their best pieces, three of them as one-sided work-outs of their old classics.
All this success gave them a chance to experiment more on their next two albums, PLASTIC PEOPLE and BACKDOOR POSSIBILITIES. Both are concept albums concerned with the rut of life and how to get out of it (i.e. drugs, etc.). These are by far the best two albums.
After their release, Peter Foller left, to be replaced by ex-Message members Manfred von Bohr and Horst Stachelhaus, on drums and bass respectively. These form the current Birth Control line-up, along with Noske, Frenzel and Held. The INCREASE album soon followed, which previewed the more commercial sound found on the latest album, TITANIC.
by Alan & Steve Freeman, first published in Face Out, issue 5 (August 1979)

Note: the "unissued recordings" were in fact singles tracks, but way back in 1979 we weren't to know that.