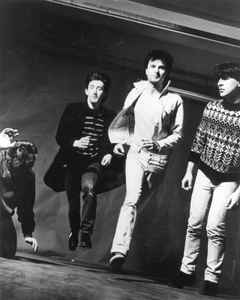 Profile:
New Wave Rock band formed in 1981 in Middleton, 6 miles north of Manchester. Mark Burgess had been in The Clichés, while Reg Smithies & Dave Fielding were in Years (3). Dave was in a school band called Sen. The three started without a drummer and got the attention of the legendary Radio 1 DJ John Peel. After the recruitment of drummer John Lever of The Politicians (6), their first single "In Shreds" on CBS, made number 42 on John Peel's Festive Fifty in 1982. They originally signed with CBS, but they disagreed with how they should sound. CBS dropped them after the one single, despite encouraging sales. They soon signed with Statik. However, Statik was distributed by Virgin, so they couldn't qualify for the independent charts and were thus overlooked by the music press.
The debut album, "Script of the Bridge", was recorded in Rochdale during a six-week period. The band was really pissed when they found out about the reduced version which was released by MCA in the US. They then became unhappy with Statik and tried to get away from them, but were bound by contractual obligations. After their second album, "What Does Anything Mean? Basically", they signed with Geffen. While signed to Geffen, the band released what was to be their last album together for fifteen years, "Strange Times" as the band literally fell apart, acrimoniously, with grief after the 1987 sudden death of band manager Tony Fletcher.
The dawning of a new millenium saw an ending to the 'hostilities' as the band buried hatchets, kissed and made friends once more, culminating in a reforming of the group, and a new 'unplugged' album entitled 'Strip' -- with live albums following beyond.
Sites:
Wikipedia, MySpace, chameleonsuk.blogspot.com, thechameleons.tmstor.es
Members:
Brian Schofield, Dave Fielding, John Lever, Kwasi Asante, Mark Burgess, Martin Jackson, Reg Smithies
Variations:
Viewing All | The Chameleons
Chameleons, Chameleons U.K., Chameleons UK, The Chameleons U.K., The Chameleons UK, The Chamelions

This is one of the best albums ever created, i cherish it since 1998 and have played it hundreds of times.
Dark, romantic and warm, just perfect.

Their sound became cold on their other 2 albums and i cannot say that i like them.

well put Escapist...having turned into a prick in early 80's Manchester I missed some music and some united games due to drugs and a little prison.it was while I was away my mate wrote about seeing the best band on the planet and I would love em..and they were and I very very did...ist album he taped for me and the chameleons are in my blood forever..i like the reegs and I liked burgess more with sun and the moon as opposed to sons of god..but preferred them together which was never enough..was it? yeah it was brilliant they got back together and I suppose in a way it makes you appreciate it more with all the breaks for one reason and 100 others..but they sound awesome as always with to my mind the best pair of guitarists I have ever heard for playing off each other, and fuck me I've heard a few...ageless music of the highest and mightiest order.i love keef and Ronnie ,and I know they have an excellent 'old Flemish weave' between them but its standard blues/rock maybe various tunings where as they don't have the colour and textures as well as the heavy fuck off drive that the Manchester boys have....I am writing this belatedly im sad to say..chameleons vox are vox without the chameleons, and a really great sound all the same..just..not the same..until the next reunion then..and its your round by the way tricky bollocks!

Bringing a new spectrum of music from the onslaught of bands of the post-punk era, the Chameleons brought a mature, dreamlike sound to light. Frontman Mark Burgess & company created thrilling ethereal music from elements of old-school psychedelia and avant-garde 70's music. Shrill and melodic guitarwork from Reg Smithies and Dave Fielding complimented Burgess' trancey basslines and voice with John Lever's thundering drums. Four solid albums and several compilations of great stuff keep the Chameleons going strong from one century to the next. So glad they got back together!