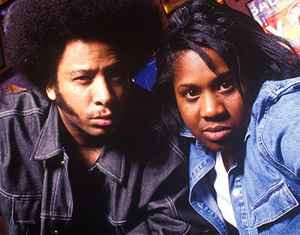 The group had a brief moment of worldwide fame at the time of the 9/11 attacks when it was revealed that the proposed cover for their upcoming album Party Music featured Boots blowing up the World Trade Center. This cover was swiftly pulled! It is ironic to note that this discovery was made mere days before the actual attacks.
Sites:
MySpace, Wikipedia
Members:
DJO (10), Eric Davis, Pam The Funkstress, Raymond Riley, Silk-E
Variations:
Viewing All | The Coup
Coup

July 31, 2021
whose responsible for the price gouging on these records!? v pissed pick a bigger weapon has become unobtainable.
Reply Notify me Helpful

August 8, 2019
Does anyone know if they're planning to release Sorry To Bother You: The Soundtrack on vinyl? Thanks!
Reply  See 1 reply Notify me Helpful