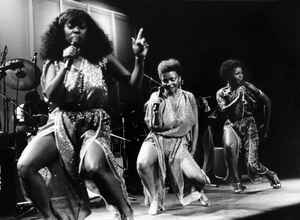 Joy is a South African female vocal group, who had a charts-topping hit in South Africa in 1980 with "Paradise Road". The record spent nine weeks at the No. 1 spot, and went on to become considered an unofficial South African anthem. Felicia Marion, Thoka Ndlozi and Anneline Malebo joined forces in 1979 and proceeded to set South African stages alight with colourful and fiery performances. They were very successful in the South African charts as well.

Prior to their forming, each singer led a solo career. Thoka Ndlozi had appeared in a couple of Gibson Kente's productions, Zwi and Sikalo, and had sung with the Uncle Joe Rhythm Cabins. Felicia Marian did backing vocals for Sammy Brown and toured the country with the Sound Black Shows. Anneline Malebo toured with the Rockets and recorded two solo singles: "Let's Live Together" (1976) and "Love The Way You Love" (1977). Brenda Fassie sang with Joy for a short period, filling in for Anneline Malebo who was on maternity leave.