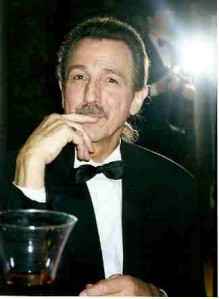 He started playing piano at age 4, and took formal studies from age 5. Classically trained, but also self-taught in contemporary styles and all keyboards, he became an original member of the British vocal harmony group The Fortunes ("You've Got Your Troubles") 1964-70, (Decca Records UK, Press/London Records USA) handling keyboards, vocals and arrangements.

He relocated to California in early 1971 and became the studio keyboardist and arranger for the legendary instrumental guitar group The Ventures ("Walk Don't Run," "Hawaii Five-0") from 1971 to the present. He also appeared as producer, arranger, musician, and/or vocalist on countless recordings by myriad artists over the past 35 years, including hits by Helen Reddy (Capitol) and Steel Breeze (RCA). He wrote songs for The Flintstones TV cartoon series in the 1970s, and developed a 25-year relationship with OGM (formerly Capitol) Production Music, starting in the early 1980s, in which he recorded much of the music in their catalog, while also designing, implementing and administering their music licensing and client/catalog management systems and software.

He was an original band member (keyboardist/arranger), with Neil Norman and his Cosmic Orchestra from 1995-2001 (GNP Crescendo Records).
From the mid-1990s onwards he was a partner and chief publicist in the entertainment PR and consultation firm The KubRo Group, based in Burbank, California. He was heavily involved in the preparation and editing of two music interview books by Harvey Kubernik, This Is Rebel Music: The Harvey Kubernik InnerViews and Hollywood Shack Job: Rock Music in Films and on Your Screen, published by the University of New Mexico Press in 2003 and 2006 respectively. He had extensive touring experience in the U.S., Europe, Japan, Central and South America over more than four decades. He was later involved in personal management, representing finger style guitar virtuoso Toulouse Engelhardt, writer-producer-director Travis Edward Pike, and others.
In Groups:
The Fortunes
Variations:
Viewing All | David Carr (3)
Carr, D. Carr, Dave Carr, David Carr