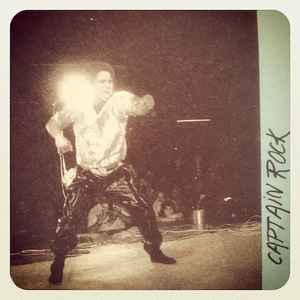 Real Name:
Ronald Wayne Greene
Profile:
The Captain, a mainstay of the NIA label, has rocked it with three all-time classic cuts: the George Clinton-esque "Cosmic Blast", "To the Future Shock" and "Return Of Captain Rock". His other releases include "You Stink" and "Bongo Beats" which were more straight up rap cuts in comparison with his other electro tracks, and his debut "Cosmic Glide" which was more on the pre-electro disco-funk rap tip popular before Planet Rock changed everything. One of the great showmen of Hip Hop, as happy on stage as he is in the studio, Captain Rock surely rocked the house with his live performance on UK Fresh 86.

May 17, 2021
Leroy Burgess: “ RON GREEN (aka) CAPTAIN ROCK.
NIA Records was a Family.
A small, unassuming label helmed by twins Tunde-Ra & TaharQa Aleem.. driven by a dream. The majority of its Artists hailed from our shared village of Harlem, myself included.
It was a dream we all shared.

As such, we were all family.. in a manner of speaking. We loved and cared for one another deeply and genuinely. And Ron Green and I were instant friends, from the moment we met.

Brothers in every sense of the word, we appreciated each other's talent.. and the persons we were, beyond our Gifts. We laughed and cried together.. with no shame to our game. Held each other up.. when one was falling, as brothers do.

Upon discovering the news yesterday, I immediately called TaharQa.. who received confirmation from Alonzo Brown (of Jekyll & Hyde), that Ron had indeed ascended. The numbness descended upon me instantly.. and for a good while, I felt outside of my body. Another brother.. called to return by the MOST HIGH. This lasted for a good while.

Resultantly, I am in mourning.. yet again.
With the Green family, the Aleem/Allen family, the Harlem family. I surrender to GOD'S Wisdom in this. But it ain't easy. Never is.

I hope he knew how much I loved him.
Hope the heart of his Spirit continues to carry that with him.. on his new journey into the realm of Infinite Eternity. As my heart carries him now. And ever will.

REST WELL, WARRIOR OF MUSIC.
GOD be with you.. 'til we meet again.”

April 8, 2018
whats going on !! one of THE pioneering electro artists of all time and no comments a great artist back then and still is today all streetsounds fans will know this guy delivers on performance x 1000 !! great at ukfresh 86 and still great at the reunion 25 years later with thanks to rob evans who was the guy that actually found him again and brought him back to you via mr morgan khan ;-)

January 28, 2018
You can now get the LP on bandcamp. However the recording appears to be as flat as the CD version that was released.
Such a shame that this hasn't had a remaster or something , the tunes are GOLD ! GO the Aleems ,, who's other gems are also
MIA ( rather than on NIA ;-) )