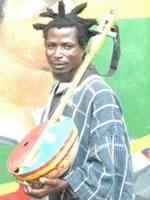 Real Name:
Apozora Ayisoba
Profile:
King Ayisoba is a hiplife performer and Kologo (guitar) player. born in June 1975 at Bongo SOE near Bolgatanga, in the Upper East Region of Ghana.

He learnt how to play the kologo (a traditional two stringed guitar) from his grandfather, a traditional healer. He starting playing music at pito bars and festivals and soon became a child prodigy

He eventually left Bongo Soe for Techiman Nyampenase in the Brong Ahafo Region to do farming, but moved to Accra after one year, teaming up with Terry Bonchaka. While with Terry, he wrote and composed songs, playing the Kologo, while Terry did the raps. After Terry Bonchaka’s sad death in 2003, he featured on ‘Mama Africa’ with Krontihene.

In 2007, King Ayisoba finally released his first solo album "Modern Ghanaians", which was produced by Panji Anoff for Pidgen Music, and contained the popular hit song “I want to see you my father", which did well in the charts in Ghana.
Sites:
ghanabase.com, ghanaweb.com, bbc.co.uk
Members:
Ayuune Sulley
Variations:
Viewing All | King Ayisoba
Albet Ayisoba