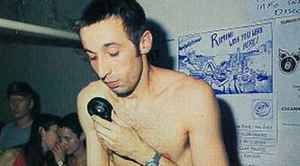 David Dorrell's career started as a journalist at UK music paper the NME (New Musical Express) and magazines including The Face and ID Magazine. His DJing began as a hobby at school before getting his first breaks at legendary nights including the Dirtbox & The Batcave, for whom he wrote the sleeve notes of the album, Batcave: Young Limbs And Numb Hymns (1983). Further stints DJing at London clubs including nights at The Wag Club in Soho and residency at the long running night RAW put Dorrell into the forefront of clubbing in the UK and also led him into his first management roles. After a brief stint managing members of the band Pride - the band that gave Sade her break - Dorrell managed the band Say Wild (later Nasty Rox Inc - at Dorrell's suggestion), augmenting the four-piece with percussion (played by Nellee Hooper and Karen Geary aka MC Kinky) before drafting in UK Scratch Mix Champion CJ Mackintosh as the world's first fulltime 'turntable percussionist' in a band. Trevor Horn signed the band to his ZTT Records in 1987, releasing their only album CA$H the following year (1988). After meeting Colourbox's Martyn Young, who was an old school friend of Nasty Rox Inc's lead singer, Dan Fox, Dorrell and Young worked together in the studio to produce what would be the first musical 'idents' for the roll-out of MTV Europe. This in turn led to Dorrell going into the studio later in the year, at the request of Young to help him produce what would become Pump Up The Volume, a UK Number 1, by the one-off collaborative project, M|A|R|R|S. Dorrell's studio career led him to working extensively with CJ Mackintosh - remixing artists including De La Soul, Janet Jackson, A Tribe Called Quest and Young MC and producing records for Tina Turner, Deskee, Cookie Crew and Junior Reid amongst others. He also collaborated with Andrew Hale (of the band Sade) on a remix of Ryuichi Sakamoto's Rolling Stone's cover, We Love You. Stand alone credits include remixes for P.I.L. (Warrior) and U2 (Can't Help Falling In Love). In 1991 Dorrell founded LOVE Records (a nod to his popular 'acid-house' night LOVE that run at The Wag Club from Summer 1988 until 1990) - signing American rapper Nikke Nicole, Tony Thorpe (of KLF fame), The Specials AKA singer Stan Campbell (as Motherland) and released Dave Angel's first 'official' 12" under the moniker Dark Angel.

Also Was One Of The First Resident Dj Back In Early 90's At The Infamous Back To Basics Club In Leeds Run By Dave Beer, At Tony Hannen Night Up Yer Ronson On a Friday Night, And Is On A Few Of The Very First Up Yer Ronson Flyers If I remember Right The Light Blue One, I've Still Got It Some Wear In The Collection As He Was Close Friends With Mr Beer When Basics Was At The Old Music Factory Before The Moved To The Pleasured Room's