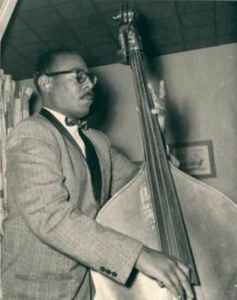 Real Name:
Milton Addison Abel
Profile:
Milton Addison Abel was born July 5, 1928 in Philadelphia, Pennsylvania, one of 16 children to Harry and Susie Abel. Abel served as a Corporal in the U.S. Army and was based at Fort Leonard Wood. During his time in the U.S. Army, Abel played trombone and baritone horn in the 315th Army Band. When it came time for his Army discharge, Abel moved to Kansas City, where he met pianist and vocalist Bettye Miller.

Miller and Abel began their twenty-plus-year musical romance when they met in 1953. The duo played faithfully at local Kansas City venues such as the Horseshoe Lounge, the Plaza III Restaurant, Putsch’s 210 and the Strawberry Patch as well as national venues such as the Ember’s in New York, Mr. Kelly’s in Chicago and the Dunes Hotel in Las Vegas. During their years together they also released several recordings. On February 28, 1977, Bettye Miller died of cancer at age 49.

After the passing of his first wife, Abel continued his musical career as a bassist in Kansas City. He played with several groups in the city such as the Kansas City Jazz Quintet, the Frank Smith Trio, the Pete Eye Trio, as well as engagements with Bettye’s daughter, Betty Jo Miller. In 1986, Abel formed the Milt Abel Trio, performing at such Kansas City establishments as the Alameda Plaza Rooftop Lounge, Westin Crown Center Signboard Bar, and the Allis Plaza Hotel 12th Street Room.

In 1980, Milt Abel married Linda Erwin. They had two children, son Milton II in 1983 and daughter Chloe-Grant in 1988. Abel and his son were playing gigs together by the time Milton II was six years old. Some of Abel’s greatest achievements include his induction both as an Elderstatesman of Kansas City Jazz and into the KC Jazz Commission’s KC Jazz Hall of Fame, both in 1989; a lifetime Gold Card Membership in Local 34-627 in 1993; and in 2005 was a recipient of the Coda Jazz Fund Lifetime Achievement Award. Milt Abel died on February 3, 2006, at age 77.
Sites:
library2.umkc.edu
In Groups:
Bettye Miller Trio, Frank Smith Trio, Pete Eye Trio
Variations:
Viewing All | Milt Abel
Milt Able, Milton Abel