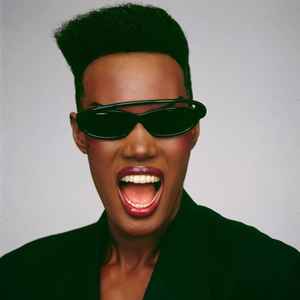 Real Name:
Grace Beverly Jones
Profile:
Jamaican singer, actress and supermodel born on May 19, 1948 [some sources claim 1950 or 1952] in Spanish Town, Jamaica, West Indies. She moved to Syracuse, New York, in her early teens, where her parents had relocated and founded the Apostolic Church of Jesus Christ.
She moved to New York at 18 and began a modelling career that took her to Paris where she worked for Yves Saint Laurent, Azzedine Alaïa and Kenzo Takada and photographers such as Helmut Newton and Guy Bourdin. While in Paris, she branched out into a recording career, first as a disco diva, working with Tom Moulton, before evolving towards a reggae / new wave sound created at Compass Point Studios with Sly & Robbie and marked by striking visuals created by her then partner Jean-Paul Goude.
Her first connection with music perhaps is her uncredited appearance on the cover of the 1973 reissue of Billy Paul - Ebony Woman.
She published her autobiography in 2015, I'll Never Write My Memoirs (a line taken from her song Art Groupie), co-written with Paul Morley, in which she comes back on her early childhood in Jamaica, denies some longstanding rumours and fuels a few new ones.
Grace is the granddaughter of Dan Williams (8), daughter of Marjorie Jones, sister of Bishop Noel Jones and Chris Jones (20), and mother of Paulo Goude.
Sites:
gracejones.com, Facebook, instagram.com, Twitter, Wikipedia, YouTube
Variations:
Viewing All | Grace Jones
C. Grace, C. Jones, G Jones, G. J.ones, G. Jones, G. Jones,, G.Jones, G.R. Jones, Grace, Grayze Ones, Jones, Mrs. Jones, Γκρέης Τζόουνς, Грейс Джоунз, グレイス・ジョーンズ, グレース・ジョーンズ

October 6, 2021
"Mummy...she's scary !"
https://www.youtube.com/watch?v=qfALrtu2Mqw
I do hope the expanded albums thang hasn't stopped with Our Grace ?
Where d'ya buy all these like ?
https://www.discogs.com/release/4470930-Grace-Jones-Corporate-Cannibal-Mixes
Reply Notify me Helpful

August 27, 2021
Does anyone know the real background story of the single of Living My Life. Was it recorded at the album sessions ? Was it intended to be the title track and just didn't make the final cut? And if it was only intended to be a stand alone single, a common practice in the 80's, why was it only released in Portugal? And finally , no 7" version/why only 12" as there is obviously a single edit used in the One Man Show video?
Reply  See 1 reply Notify me Helpful

I love Grace. She's incomparable, even in 2020 and beyond. Having said that, I strongly favor her trilogy of Compass Point/Sly & Robbie albums over her first 3 (disco albums).

November 10, 2018
Webmaster - Why doesn't this release Grace-Jones-The-Ultimate-Collection/release/1437840 appear on this page? I only got to it from a link on the Wikipedia page for this album.
Reply Notify me Helpful

October 25, 2017
Love to see her one man show VHS updated and cleaned up on dvd/bluray.
Reply Notify me Helpful

April 5, 2016
I hear she's actually from the 19th century, the internet said so
Reply Notify me 6 Helpful