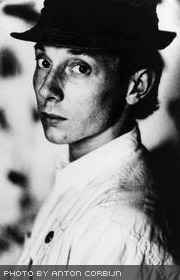 Born in Scunthorpe in 1952, he was brought up in Nuneaton and Leeds and went to Leeds Grammar School. He later studied at Bolton Institute of Technology where he met Pete Shelley. They co-founded Buzzcocks in 1976, with Devoto leaving the group just before the release of their Spiral Scratch EP. He went on to form Magazine who were active from 1978-1981. After Magazine broke up, Devoto left the music industry, eventually getting a job at the Network photographic agency in London, where he would stay for 16 years. In 2002 Devoto reunited with Pete Shelley releasing material under the name ShelleyDevoto. After being dormant for nearly three decades, Magazine performed a series of gigs in 2009.
Sites:
independent.co.uk, aidan.co.uk, web.archive.org, theguardian.com
Aliases:
Howard Trafford
Variations:
Viewing All | Howard Devoto
DeVoto, Deveto, Devoto, Devoto H, Devoto Howard, H Devoto, H. Deveto, H. Devoto, H.Devoto, Harald Devoto, Howard De Voto