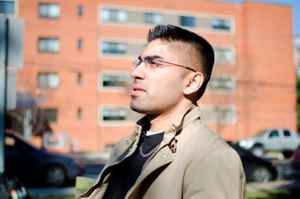 Profile:
DJ Nav is a House and Garage DJ and producer who has been making party goers groove and reach out for the baby powder for several years now. Recently coming through the ranks of the underground after playing gigs at U street music hall and Flash bar, he is garnering a well-deserved name for himself as a purveyor of no-nonsense dance music, for dancers.

His taste is for the "the golden sound" of house dropping New York and Jersey house dubs, Chicago house jams as well as London garage. Preferring the physical nature and warmth of vinyl, you will find his bag is stocked with both vintage records as well as the latest underground house 12" releases.

DJ Nav has himself been releasing successful dance music lately, forming a following with a string of underground releases on labels such as Brooklyn's Love Revolution, Made Fresh Daily, and Spanish imprint Traxx Underground.

Nav has also curated an authentic house podcast called The Uptown House Experience, now on its 5th installment. Each podcast has a distinct flavor such as the deep disco of part 4 or the deep and techy sounds on his latest part 5. The cover art depicting locations around the DC area is also a nice touch.
Aliases:
Human Interaction (2)
Variations:
Viewing All | DJ Nav
Naveen Rajan

This is the Shit! by riot
soul dance artists by detroitlotus
View More Lists →