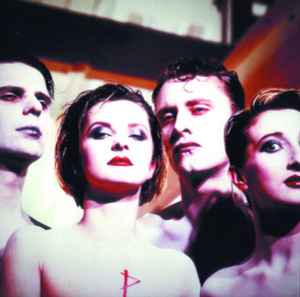 Profile:
Synth pop group originating from Düsseldorf, Germany; formed in 1982 by former Die Krupps keyboard player Ralf Dörper and Andreas Thein. The first recordings were made in the summer of 1982 (at 'Zero Green Studio' in Essen, Germany, the reason being that it had a PPG Synthesizer.) Dörper and Thein recorded two songs, "Disziplin" (political) and "Sünde" (religious), with vocals provided by Susanne Freytag. The plan was to release them on the London label Operation Twilight which had released Ralf's solo records in the UK. However, Ralf also sent the two songs to Chris Bohn at the NME. This came to the attention of producer Trevor Horn, who signed the band to his label ZTT in 1983.

A few months before ZTT signed them, the band (incl. drummer Weet) were invited to London to record tracks with Nick Froome at Basing Street Studios in February 1983 (soon to be renamed Sarm West). Trevor Horn, Jill Sinclair and Paul Morley wanted to explore what Propaganda was about and decide whether to sign them based on the material recorded in that session. Demos of "Doppelganger", "Radetzky Marsch" and "Mabuse" were recorded in this session.

Propaganda has been through several line-up changes in its recording career:

Claudia Brücken left Propaganda in 1986 and the remaining members of the group took ZTT to court to release them from their contract. New album demos were recorded in 1987-88. Mertens, Freytag and Dörper were joined by Derek Forbes and Brian McGee along with vocalist Betsi Miller. Although Freytag and Dörper contributed to the new album, they were no longer members by its release.

By 1998 Mertens was working again with Brücken and Freytag, and in 1999 Propaganda's website announced a new album was being recorded. This line-up were set to sign with EastWest, but this was not to be, and the album remains unreleased, although recordings leaked via the internet. Some of the tracks were recorded by Brücken's act Onetwo and released on "Instead".

In 2004 Mertens, Freytag, Brücken and Dörper reunited for a performance of Dr. Mabuse to benefit The Prince's Trust and to celebrate Trevor Horn's 25 years in the music industry.

In 2011, Brücken performed a live concert in London and was joined onstage by Dörper and Freytag. Around 2014 Mertens, Brücken, Freytag and Dörper started working together on new material, but the planned reunion did not take place as the two parties had different views on live performances. In 2015 Propaganda (i.e. Dörper and Mertens) was credited for remixing Holly Johnson's "Dancing with Fear".