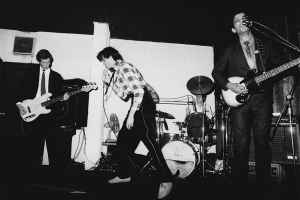 Profile:
The Manikins were a protopunk and new wave band from Perth, Australia.
The band formed in August 1976 as the Cheap Nasties. Their debut gig was at The Rivervale Hotel in mid-1977. They lay claim to the title of Perth's first punk band. The original Cheap Nasties' lineup was Kim Salmon (guitar/vocals), Neil Fernandes (guitar/vocals), Ken Seymour (bass/vocals) and Mark Betts (drums). Salmon left the Cheap Nasties in December 1977, to form The Scientists (2).

The rest of the band, with Robbie Porritt joining as lead vocalist, continued as The Manikins. The raw sound of the Cheap Nasties gradually gave way to a poppier, new wave-oriented musical direction.

Dave Faulkner, ex-The Victims, joined for a brief period as keyboard player (1979–1980). He would later be a founding member and the mainstay of the Hoodoo Gurus. Seymour also left, to be replaced by Dan Dare.

The band had several residencies in Perth, in particular Wednesday nights at the Broadway Tavern in Nedlands and the nightclub Hernando's Hideaway. The band relocated to Melbourne in the early 1980s, but broke up soon afterwards in 1981.