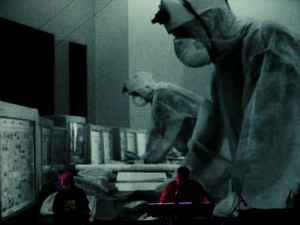 Real Name:
Maciek Frett & Aureliusz Pisarzewski
Profile:
Audiovisual project established in Wrocław (Poland) in 1997. The members are Maciej Frett and Aureliusz Pisarzewski, with Arkadiusz Bagiński in charge of the visuals. The group hails from the post-industrial scene but with every new album the musicians cast their net wider into the extended field of dark electronica - from ambient to techno, dark wave and EBM. What remains unchanged is the quality of their music that, as the critics say, makes it “a movie for your ears”: picturesque and expressive, it is an ideal soundtrack for the never made film that the listeners can ‘see’ using their imagination.

The group is famous for their suggestive live performances that combine music with the elements of animation and video art. They depict the relationship between human and machine and between human and sacrum as well as slow decay of value systems due to advancing comercialization of everyday existence of individuals and societies.