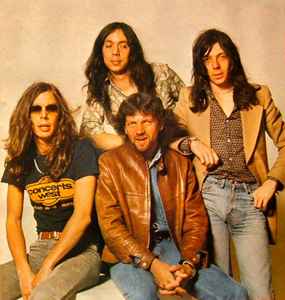 For the tour following the release of the band's fourth album, Moonmadness (1976), they were joined by former King Crimson sax player and flautist Mel Collins. In early 1977 Ferguson left and was replaced by Richard Sinclair (from Caravan) as the band moved to a jazzier sound. By the end of 1978 a series of personnel changes included the departures of Bardens, Sinclair and Collins and the additions of Colin Bass, Kit Watkins and Jan Schelhaas. Their seventh studio album, I Can See Your House From Here was problematic for advertisers due to the cover art: a crucified astronaut looking at Earth. It also marked Camel's return to the UK charts at number 45. The band had three further studio albums, a live album and numerous personnel changes before disbanding in 1984.

February 17, 2021
I’ve seen all the big names in Prog, BJH, ELP, PINK FLOYD, GENESIS, YES, KING CRIMSON. But Camel always stands out for me and never got the recognition they deserved.
Reply  See 1 reply Notify me 2 Helpful

March 5, 2019
People i.e. prog-heads/music nerds place Genesis, ELP and Yes on a pedestal and a milestone of that genre but there are some of us who believe Camel deserved much more exposure than the band never received thru-out the 1970s especially here in the US. The band was just as technically inclined and mastered the art of complex compositions drawn on European classical influences.
Andy Latimer has always been the flame that has kept the band alive and regardless of Pete Barden's and a few other original member of the band not included in later releases there are still some really great albums Camel released even when trying to conform to the changing times i.e. shorter popier compositions.
Well I tell you this album has one track that alone is worth the price of admission ICE! Its has that heart wrenching melancholy that Wind & Wuthering Genesis managed to conjure up in the guts of the slow waning Rhodes piano and beautiful guitar melodies.
Kit Watkins and Jan on keyboards provided an exceptional foundation to Andy's guitar work and even tho Pete's signature sounds is gone south the before mentioned musicians where strong contenders for supporting the band the later 70s ie.. the death nail era for conceptual rock!
I wont say this is Camels finest moments those where obviously Moonmadness and The Snow Goose however I don't believe personally Camel ever made a bad record they all in someway always point to the direction from whence their roots began i.e. progressive rock!
Reply Notify me 5 Helpful

The not existing disc?
Reply Notify me Helpful

Mis Artistas by Blake01492
artists/bands I have seen live by pabloni
Live gesehen by progdraco
GOOD MUSIC by SITF21-
Bands / artists I've seen live by 70sProgFan
ARTISTS I SAW “LIVE" by tiopepe
Artists I Enjoy To Listen To by appazappa
Seen Live... by ykr_discs
interesting by gettinghigh
CDthèque by Atomago
Influences by mrfunkydrop
基本リスト用のアーティスト一覧 by 3313project
基本リスト用のアーティスト一覧 by arapstock
Favourite Bands by Pioter78
Artists for the Future by Milesbeet-hoven1
Psych, Prog + Spacerock + Mathrock + Postrock + Artrock by TiemoOTheYordle
Favourite Artists by Basiq
My Artists by filiuta
Canterbury scene by Monsieur_Renard
Bands I have seen Live by 2112adrian
VISIONARIES, TRAILBLAZERS, OUTLAWS, SONIC ASTRONAUTS, WITCHES, WIZARDS, SLUDGELORDS, VIXENS, NOISE MONGERS, GENIUSES & BEAUTIFUL WEIRDOS that you should hear before you die. by GonzoZoltard
Favorite Artists by spacemanspiff22
Favorite Artists by Lethrus
Camel by BaubleDawdle
View More Lists →